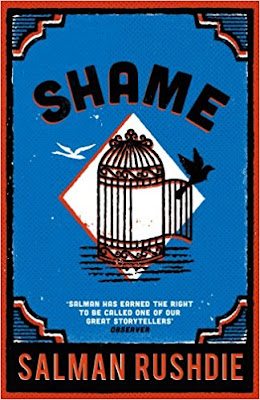 Shame is Salman Rushdie's third novel, published in 1983. It actually is a political novel, but as with his other works, it is written in the style of magical realism. The novel is set in Pakistan, but in a very fictional alternative Pakistan, where the main events revolve around Iskander Harappa and General Raza Hyder, as well as Omar Khayyam, a satellite character that is caught in between these two. Iskander Harappa and Raza Hyder are fictional depictions of Pakistan's Zulfikar Ali Bhutto and General Muhammad Zia-ul-Haq, respectively. As the title suggests, the central theme of the novel is shame (or the lack of it), with the thesis that violence is borne out of shame.

Since it is magical realism, there are plenty of fantastic elements in the book. The book begins by describing Omar Khayyam's heritage: he is a doctor raised by three eccentric mothers, Chunni, Munnee, and Bunny. He doesn't know who his father was, and all three women act as one, so when one became pregnant, the two others also showed signs of pregnancy in solidarity with their pregnant sister. They lived in a cloistered state, locking themselves out from the outside world.

Oh there's also the fascinating Sufiya Zinobia, a retarded woman who has sex with random men, and after the encounter she tears off their heads with her bare hands.

There are plenty of other magical realistic aspects of the novel, which makes it quite a read. Though sometimes, I must say, unlike other magical realistic novels of Rushdie I have read, there are times in which I got lost, and started thinking that the narrator (or writer) must have been drunk. There were times in which I started thinking what was the whole point. But in any case, at some point it clicked back into place, and by the time the novel ended, I was full in attention.

I don't know enough of Pakistan's history to actually map out the magical events described in the book between Iskander Harappa and Raza Hyder to the real events that happened between Zulfikar Ali Bhutto and Muhammad Zia-ul-Haq. But in any case the book depicts how the world can be crazy due to the decisions by tyrannical rulers. Parts of this novel almost felt like a dictator novel in the style of Gabriel García Márquez. But since the focus bounces back and forth between two characters, there was no single spotlight on any of these two powerful men. Rather, the focus becomes more on how shame and shamelessness in these two men result in violence, and how their lives go up and down.

Overall I enjoyed this book, though I am probably more enthusiastic with his other novels than this one. If you're thinking of reading a Salman Rushdie novel for the first time, then skip this book and read a different one first, something that is easier to get into. Read this if you already know his style, and actually like it. I give it 4 out of 5 stars.