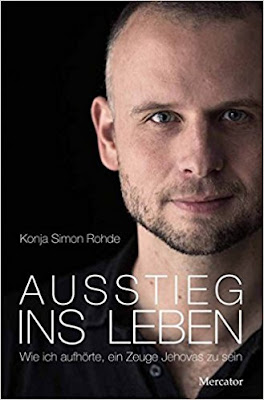 I've been reading personal accounts of ex-Jehovah's Witnesses lately. After reading Misha Anouk's book, this time, I picked up this book by Konja Simon Rohde, who I must say, had a very different experience exiting this cult, which is also different from my own.

See, Rohde had different life circumstances. He lost his elder brother to suicide, and this event perhaps made the resurrection "hope" quite attractive: the cult teaches that you have to follow whatever they say in order to be able to see your lost loved-ones again when they are resurrected. I often wonder how many people the cult have captured by giving this false hope. I definitely think that getting involved in this cult becomes easier when one finds oneself in a vulnerable phase in life. After all, if everything is working, then you won't want to find answers to life's big problems, but if life is giving you one trial after another, then you would start looking for hope. And boy the Witnesses offer you a lot of bullshit that is rather easy to swallow.

In any case, Rohde was an "exemplary" cult member. Unlike me, he was deeply involved in the cult for a long time, and sincerely believed its teachings way into adulthood. I suppose I could consider myself lucky in the sense that I became PIMO (physically in, mentally out) at quite a young age, so I was able to craft my exit rather relatively smoothly. For Rohde, his experiences amount to being born again (not in the religious sense) when he was in his mid-thirties, by that I mean finding oneself in a situation where one relearns everything about how human society works. After all, the Witnesses think they are not part of this world, which makes for very bizarre social perspectives sometimes.

Rohde's experiences illustrate how mentally taxing this cult is. Even I had to go through counseling and therapy for two years when I decided I had to exit. It was just very mentally challenging, after all, when members decide to exit, they are shunned, and their entire social network pretty much cuts them off. The cult discourages them from making any kind of social relationships outside the cult, so faithful members only know people who are inside. They only marry members, they try as much as possible to work and earn a living only with members, and so forth. So when they decide to exit, and they are shunned, their whole lives collapse. You can imagine how mentally taxing that is.

In any case, I am glad to read of Rohde's experiences as he gets out of this cult and into the real world. It is a hard transition, but it can be done. This is a serious and at times very sad book, but it also displays how bizarre the world of the Witnesses can be. I can only recommend it. I give it 5 out of 5 stars.