Book Review: News of a Kidnapping by Gabriel García Márquez 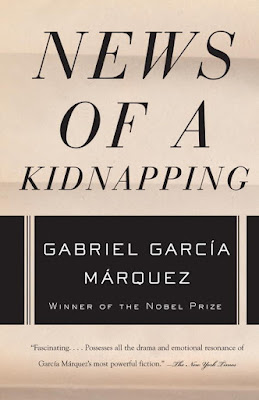 Oh boy, this was at times a difficult read.

The thing is, this book is non-fiction. There is nothing magical about it: no cholera, no sandstorms, no adulterous virgins, nothing like the Gabriel García Márquez that I previously knew. Everything in here is fact, as García Márquez narrates the kidnapping of several prominent public figures in Colombia by Pablo Escobar. There were ten hostages altogether, and two of them die. The book covers a period of about six months, from the point when they all got abducted one by one, to when they all get released one by one.

García Márquez narrates in a very detailed manner, describing how the hostages dealt with the situation on a day to day basis. And in fact, what impressed on me the most was the slow psychological change that goes through the minds of the hostages. Different people deal with the situation in different ways: some regress to psychological immaturity, while others have a different defence mechanism altogether. From a behavioural standpoint, I find this variation very interesting.

At some point, I think I internalised what I was reading enough that I started having nightmares about being kidnapped and held hostage. I once had a dream where I was trapped in a house by a mad woman, who was torturing me using various methods, and I was made witness to several other gruesome acts that this woman committed to other victims, including murder and dismemberment. In any case, I was glad that it was just a dream.

In any case, I must say that García Márquez is a captivating writer, even with non-fiction. I don't know how he had access to this wealth of information, but it kept me turning the pages. I haven't really explored Colombia (I have been to Colombia, but only in the form of a 9-hour layover where I exited the airport in Bogota and explored the Old Town for a few hours), but I am glad that its reputation is way better now than before.

So yes, I liked this book, and I would recommend it to people who want to know more about this period of history. I give it 4 out of 5 stars.