Book Review: Look Who's Back by Timur Vermes 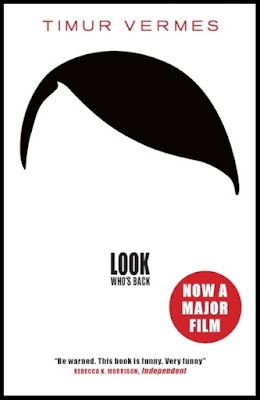 I wanted to burn this book. Typically I don't leave a book unfinished once I started it, but this is the first book that made me almost do it. I did read it to the very end, but yes, I wish I picked up a different book instead. The interesting thing is that I actually tried watching the film. But after seeing about a third of the film, I decided that the film was not for me, and stopped watching it. This was before I read the book.

Well, there's a science fiction aspect to it. The premise is that Adolf Hitler is alive, as if he was just in a deep sleep for the past 60-something years. He wakes up one morning in 2011, in the middle of Berlin. So he knows nothing about what has happened in the meantime, and he still carries his Nazi mentality, seeing all the changes that have occurred and all the goings-on in 21st-century Berlin through Nazi-tinted eyeglasses.

It is satire, of course, and for 380 pages, the author seems to have a never-ending arsenal of all the bizarre and absurd things that could occur given this weird premise of the real Adolf Hitler being alive, and the 21st-century Berlin population not knowing or not accepting that Adolf Hitler could still be alive. Everyone thinks he's just a method actor. And so he's treated as a star, and people ask for his autograph. People give him the Nazi salute.

I had a hard time reading this book, for many reasons. First, the main character was someone I definitely could not sympathise with. Hitler was a self-centred megalomaniac bastard who only thought in terms of German greatness, with very conservative attitudes toward men and women, and had a very skewed sense of racial purity. He was a racist, plain and simple. I cannot imagine how a person with such values could have been in a position to lead a country.

And then there are also the people interacting with Hitler, who couldn't see a racist even when it stares at them in the face! I can see so many Trump parallels here, where there are all these things that you read about what Trump has done, and yet all those Republicans don't even get bothered by it. But the moment some Democrat does the same thing, they're faster than the speed of light as they go up in arms rallying against it. Such hypocrites!

I disagree with some of the reviews of this book. This book is disturbing, it is not funny at all. A little part of me is glad that books like these are sometimes written, because sometimes people can be too numb to realise the wrongs they have been doing, and so this book is like ice cold water being dumped on you. But a large part of me thinks that I don't need 380 pages of it. In my opinion, it was 300 pages too long.

So yes, I am not a fan of this book. I would be very curious what older readers think about this book, especially readers who may even have recollections about how life was like back when this arsehole was in power. I give this book 1 out of 5 stars.