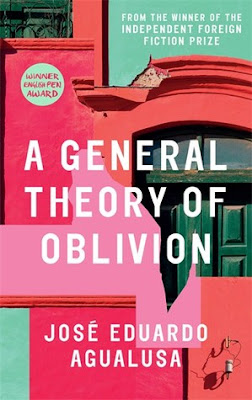 Wow. What a fascinating book. If novels were movies, this movie is definitely more Arthouse than Hollywood. It's like an onion, or a Russian Matryoshka doll, where peeling a layer reveals something new, slowly, little by little, until you reach the core, and eventually figure out what the whole story was about.

Regarding the story, it's actually a very interesting one. The narrative centres on Ludovica Fernandes Mano, an agoraphobic Portuguese expatriate in Angola's capital city, Luanda. The story begins around the time Angola declared independence, and as a result, most of the Portuguese settlers fled to go back to Portugal. Her reaction on the other hand was different: she barricaded herself in her Luanda apartment, never setting foot out again for the next 30 years, only doing so when a burglar enters her apartment through the concealed balcony.

The novel doesn't really give much: it's just around 250 pages and there's plenty of white space, and instead of giving a single-perspective narrative, it gives bits and pieces from the perspective of multiple people. Hence, the reader is forced to slowly piece together all of these relatively unrelated characters until voila, at the end, everything seems to click and fit together. Ludovica is later revealed to have a reason why she was scared of the public: she was raped, got pregnant, and somehow her father blamed her for all of that, hiding her in a room until the baby was born, and the baby was quickly given over to adoption. She later learns about the existence of this child, and meets her as an adult.

I also like how society was portrayed changing in the thirty year span of the novel, and how these changes just passed by Ludovica without affecting her at all. So when she finally knocked off the wall and revealed her door, she came out to a Luanda that was absolutely very different from the one she remembered.

This book is actually the first book I have read from an Angolan writer, and not knowing José Eduardo Agualusa's other books, I must say this was definitely a page turner for me, and so I am eager to know what other books he has written. This one is small, quite a fast read, but packs a powerful punch. I give it 5 out of 5 stars.