Book Review: The Proof of the Honey by Salwa al-Nu'aymi 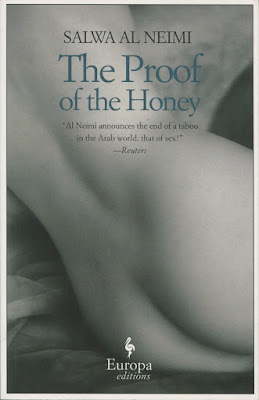 This was such a sensual read. I don't really read erotica that often, let alone Arabic erotica, so this was refreshingly surprising. It reads like a celebration of feminine desire, which unfortunately, has been suppressed in many parts of the world, not just the Arab world.

This novel is written by Salwa al-Nu'aymi, a Syrian writer, who has been living for many years in France. It's a relatively short novel, only clocking at 140-something pages. Written in the first person, this novel's narrator describes her sex encounters with many men, but primarily the man she calls "The Thinker", who she gives credit for expanding her sexual horizons. And throughout the book, she describes various different experiences, stories, as well as encounters of other women she interacts with.

It is definitely a pity that most Arab societies disapprove of this book. It's definitely not "wholesome": those conservative mullahs would definitely find its words shocking. But that's the disappointing part: every human has these natural desires, and for some reason, religion and other social forces want to suppress it. It's the same irrespective of religion, whether you're talking about Christianity, or Islam, there's this weird idealised version of what they think is a healthy sexual desire: that of monotonous monogamy, where women pretty much are reduced to child-producing bodies, left at the mercy of the men who oppress them and use them whenever the men want to have a fuck.

In any case this is a very powerful and brave book. I am not surprised that this book is banned in some countries. But it definitely is worth reading, especially if you're interested in literary expressions of sexual desire, and if you're a firm believer in the freedom of speech and expression. I give this book 4 out of 5 stars.