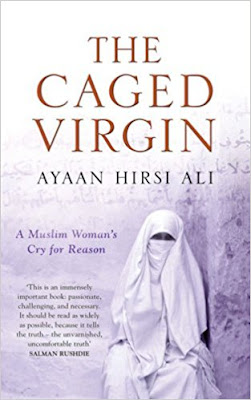 This is such a powerful work. It is a collection of 17 essays where Hirsi Ali argues for the reform of Islam, due to its negative effects on women. There were times in which I found it hard to read, mostly because of the graphic descriptions of abuse that women typically go through, in the name of Islam. And yes, I absolutely recommend it to people here in the West if they want to understand what this religion is about.

One thing that resonated with me a lot while reading this book is the fact that there's actually so many similarities between Islam and the Jehovah's Witnesses. The Witnesses don't have that visibility, but essentially, Islam and the Witnesses have parallel ways of dealing with apostates, about members who decided to leave. Looking back, I suppose I must be happy that my family doesn't hunt me down to kill me to defend their honour, even though they pretty much treat me as if I were dead already.

Hirsi Ali provides sound and practical advice to women who are thinking of breaking through the bonds of Islam and being independent. From a very secluded community, her advice guides women how to establish themselves as self-sufficient and independent, and how to physically escape from the cage that Muslim women typically find themselves in. I didn't do such drastic measures when I left home, but I do recall planning similar moves in my head, when I was planning to leave the cult I was raised in. Looking back, one major help was the fact that I had an academic ticket: a scholarship allowed me to move halfway around the world and slowly establish myself as independent. Without that, it would have been harder if I just remained in my suburban community in the Philippines.

Another topic this book tackles is cultural relativism, or what nowadays could be called the "regressive left". I mean, there are plenty of well-meaning liberals who would immediately embrace these cultural differences, mostly because they think that all cultures are equal and worth listening to. However, I think differently. Just because a certain culture practices certain things like female genital mutilation or honour killing doesn't mean we now wholeheartedly condone it, all in the name of culture. This is a hot topic nowadays here in Germany, with the immigrants coming in from Syria. Of course, since you're fleeing from war, we provide you with a safe place to stay, but this doesn't mean that you can import all cultural constructs you have at home to here. Here in Germany, we frown at honour killings, we frown at arranged marriages, we frown at the idea that women are property. So when you move here and start building madrassas and putting your children there instead of educating them properly, I won't ignore that and claim that it's okay in the name of culture.

I just hope more politicians think like that. Alas, sometimes, they fear that these opinions are too right-wing and that would cause them to land in hot water. No wonder Hirsi Ali "defected" from her former party to a conservative party, when she was a Dutch politician.

In any case, this is a must-read, and is a book containing very powerful ideas. I would recommend it to everyone, especially to women, who need to escape from a crippling ideology. I give it 5 out of 5 stars.