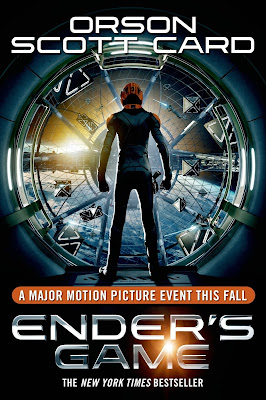 Ok, I belong to the camp that hates this book. This book was recommended to me, so I put it in my reading list, but after reading this, I realise that science fiction is definitely not my thing, and absolutely not when the military is also involved. Let me try to break it down one by one why I think this book is not worth the paper it is printed on, but first, a short synopsis.

See, in the future, humans were attacked by aliens that looked like bugs. Adults couldn't find a way to defeat them, so somehow evolution and eugenics cooperated into allowing humans to breed geniuses. So there are these children who act and think like adults. There are some weird laws in earth, like the prohibition to have more than two children. But anyway, there is this child, Andrew "Ender" Wiggin, who seems to be the best genius around there. And humans have him as the only hope to defeat the bugs.

Ender is sent to Battle School, which is in outer space, where they train these child soldiers. He's brilliant, and defeats every game, even though the game gets harder and harder, all the way to the very end, when the game is actually a battle between humans and the bugs, with him as the commander, and yes, the bugs lose. Humans win.

The shocking thing is, to get there, the author uses a lot of literary mechanisms that just rub me the wrong way. Here are some of them.

After 50 pages, I already hated it. The book felt like it was written so that loners can feel good about themselves. Ender is an outcast, at least in earth, and so he became the target of bullies. He defeats them, using military tactics and strategy (this book is required reading, it seems, in some military circles), so the bullies leave him alone. But he doesn't have friends either. The tone of the book is more or less along the lines of "Nobody likes you but you're a genius so it's okay". I cannot help but conclude that people who would gravitate toward this book are the social outcasts and the ones who are socially awkward. If you have a good circle of friends, if you're socialised well enough to have had meaningful human connections, then it would probably be hard to identify with this book. Going back to the military issue, I think this book somehow feeds on the stereotype that some have with American youngsters: they go to the military because they're isolated from their peer group. After all, they won't be missed.

Twenty-something pages later, Ender meets Bonzo Madrid. Bonzo happens to be a leader with a good reputation. Bonzo is described as some very handsome boy with extraordinary features which Ended immediately took a liking to. This reminded me of Nazi theories of how Aryan races are more beautiful than others which implies they're the ones who are supposed to lead. Only later when Ender defeats Bonzo does Bonzo gets his face disfigured.

In this book, it seems that all characters (perhaps with the exception of Valentine) are sadists. Whether it is Ender, or Graff, or Peter, everyone has a killer instinct. Everyone takes joy in inflicting pain on others, in using others for one's own benefit. Because of this, I found the book very hard to relate to and identify with, since there was no character that I could like.

Oh, did I forget to mention the fact that there's even a Hitler apologist passage? Peter (Ender's older brother) has a saviour complex, and wants to rule the world somehow. He claims that Hitler isn't too bad, rather, he's actually a genius!

Perhaps the fact that my personality type is an INTJ makes me more likely that I would abhor this book. I am not the type of person who would always embrace tradition and not question authority, irrespective of whether it is effective or not. Later on, this attitude is actually spelled out in the book: "Win first, ask questions later." It is very apt for the military, but not at all for me.

What else? This book oozes of sexism. Almost all the characters are male. I don't think the author cared for diversity at all.

So yes, this is my first one-star book of the year. I don't think I will read Orson Scott Card again after this. This author goes to the blacklist. And I haven't even touched on the fact that he's a homophobe. Yep, I give this book 1 out of 5 stars.