Book Review: The Crying of Lot 49 by Thomas Pynchon 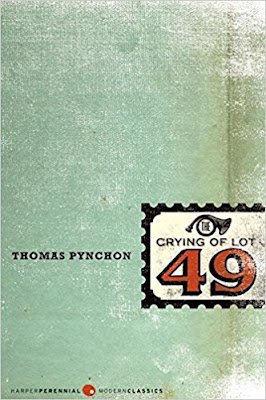 Ah, this was one fantastic book. It was gripping and left me by the edge of my seat all the way until the end.

See, with Pynchon's books, I either love it or hate it. I loved V. and Mason & Dixon, but hated Gravity's Rainbow and Inherent Vice. This current book seems to belong to the former.

The book begins with Oedipa Maas getting notified that she is a co-executor of a will of an ex. And this just leads into the rabbit hole, as she notices one little thing, which makes her think that she's just discovered a large global conspiracy dating back from centuries ago. Basically, the fight between two postal systems, Thurn and Taxis, and Tristero. The former existed in real life, but the latter was Pynchon's own invention. And the funny thing is, all the way to the end of the book, Oedipa couldn't decide whether this conspiracy is indeed real, or she's just hallucinating the whole thing.

I liked the fact that every little episode is almost an adventure. The detail to which things and situations are described is magnificent, taking into consideration that it is just a short book clocking in at less than 150 pages. It gives the reader the impression that things are lean, yet every scene is important in all its detail.

Take for example the early scene with the lawyer and the bar, where they play some variation of Strip Poker. Oedipa puts on an enormous amount of clothing just so that she can take off so many clothes before becoming naked. The hilarious scene just involves so many comic effects, including a ricocheting spray can.

With every scene, I felt like Pynchon was able to zoom into it, taking the reader with him, and then after showing the reader what he wanted to show with that scene, Pynchon takes the reader to the next scene and does the same. All the while keeping the reader in suspense: is Oedipa uncovering a global conspiracy or is everything just in her head? And no, it never gets solved in the end.

So yes, this was highly entertaining, and I absolutely recommend it. Perhaps this is the best book to begin with if you're reading Pynchon for the first time. I give it 4 out of 5 stars.