Book Review: Life and a Half by Sony Labou Tansi 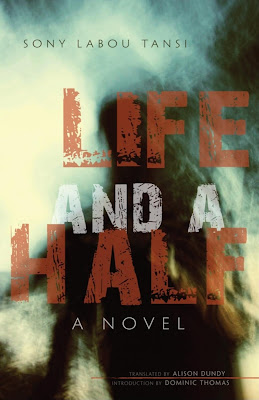 Hmm, this was a weird book. In the beginning, I liked it. Heck, I even loved it. But as it progressed, I started not caring for it. And in the end, I hated it. It's like this book with lots of energy in the very beginning, but it all fizzled in the end.

See, it's a novel that is a cross between your classical dictator novel and magical realism. It first reminded me of the dictator novels written typically by Latin American authors. Like Autumn of the Patriarch by Gabriel García Márquez, or Feast of the Goat by Mario Vargas Llosa. In the former, it was indeed combined with magical realist elements. But nevertheless, it was not overdone. There were fantastic elements yet still the reader still felt that one could suspend one's disbelief.

In Life and a Half on the other hand, the magical realist elements were over the top, as if Sony Labou Tansi was on steroids and on overdrive, using all magical elements in all parts of the book. Sure, the cannibalistic beginning was fantastic, but it kept on going, and at some point, I got tired of it.

In this book, there's basically the battle between two forces: the Providential Guide, and Martial. The Guide represents the corrupt dictator, who never dies, believes in bizarre supernatural ideas, and just kills all his enemies. Martial on the other hand represents the rebellion, and he also never dies. His ghost lives on, and wrecks havoc on the Guide and his men. There's also Chaidana, who is the offspring of Martial, who is in the centre of everything. The thing is, the Guide dies only to be replaced by another Guide, and Martial keeps on living, same thing with his daughter Chaidana. And at some point, it became hard to see that this is the battle between good and evil. Rather, it just became the battle of two evil forces. And the magical realism just turned into the theatre of the absurd.

The thing is, the narrative just turned into something superbly stupid, that I found myself just skimming the text, since I lost interest already. When there's a dictator fucking thousands of virgins so that he would have thousands of children, all with the first name Jean, then at some point you ask what is the point. Bizarrely enough, the introduction of the book had a literary expert call Sony Labou Tansi's work as sui generis, but I beg to differ. James Joyce's Finnegans Wake is sui generis. This one however felt more like a copycat, like an author who wanted to write a magical realist novel yet somehow lost steam in the middle.

I really wanted to like this book, and I did like the first 50 pages. However, as it progressed, I hated it. In the end, I was just glad it was over. I give it 2 out of 5 stars.