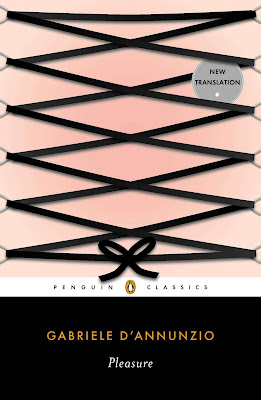 So I decided to pick this book up, just to broaden my horizons. I don't read 19th-century Italian literature that often, so perhaps this is a good time to try some. This book is the first novel of Gabriele D'Annunzio, who apparently was a prominent politician later on. This book is essentially about Italian sex in the 19th century, centring around the life of Andrea Sperelli and his two main lovers, Elena Muti and Maria Ferres.

Elena Muti is actually Andrea's first lover, who breaks up with him in the beginning of the novel. The novel then provides some history about their relationship. Andrea is never fully through with her, so even though he seduces several women after that, even getting involved into a duel where he gets a serious wound, he still remembers Elena fondly. Then he meets Maria.

Maria has a daughter, and yes, is also married. They meet while he is recuperating from his wound. And yes, they start having an affair, which then gets interrupted by virtue of the entry of the husband. In any case, Andrea's modus operandi more or less consists of pursuing women, whether for a more intense and multi-episode affair, or just a one-night stand.

Andrea is definitely not monogamous. He can't even decide between Maria and Elena. While having sex with Maria, he utters Elena's name. He confuses both women in his head. In the end, he loses both.

There are plenty of narrative jumps in the book. There's plenty of areas where you just have to fill in the blanks. First the couple are just kissing, then suddenly they're in the middle of sex which gets interrupted.

I cannot say much about the novel: it hasn't really gripped me the way other novels do. There's an aspect in the language that makes it feel a little stiff, and hard to access. Yes it has given me an interesting overview of the Italian decadent literature, but it doesn't stick to me in a way that would make me want to read more. I suppose I would only give this 3 out of 5 stars. Read it for the historical import.