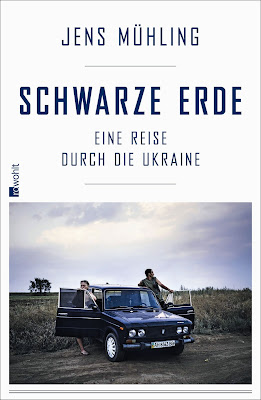 This was a very well-written travelogue, and I am glad I have picked it up. It chronicles the travel experiences of the author as he crossed Ukraine from west to east, entering from Poland, visiting the heart of the country, even the annexed area of Crimea as well as the separatist region of Donetsk, all the way to the end of the line, so to speak, in Milove. And along the way, he talks of the cultural and social issues that the local population faces on a day to day basis.

Perhaps it is because Jens Mühling is trained as a journalist, that I found the text very easy to read. Unlike other travel narratives I have read lately, this one isn't soaked with unnecessary emotional bursts or superficial motives. I found Mühling's writing style to be very objective, and even though he definitely has his own perspective on things, and it is clear when he doesn't agree with the people he is conversing with, nevertheless, it is done in a very professional manner. He knows when to agree to disagree, so to speak. And that I found very positive when it comes to the narrative.

What impressed me the most was the realisation that somehow media definitely makes a big effect on people. There are people he interviewed that just believed the craziest things about what is happening out there. Russia is a massive power in the area, and there's plenty of propaganda and fake news floating around that stem from Russia, especially when it is about its enemies. It's somehow unbelievable that some people just swallow that without asking for confirmation. Perhaps this is a side-effect of the times we live in, when there's so much media sources that can easily bombard our brains.

In any case, Mühling did a great job covering Ukraine. He went all over the place, even in the bureaucratically hard places to reach. There is this sense of admiration for travellers, and I am no exception, when one encounters someone who have been to places that are hard to reach, like Crimea, the so-called Donetsk People's Republic, among others. This is definitely off the beaten path, given its current political circumstances. And the interesting thing is that the stories stemming from these regions, which Mühling wrote, are full of complex issues that are very hard to disentangle.

This book made me aware of many aspects of Ukrainian history. Plenty of events I haven't even realised occurred, such as the Holodomor. I suppose these historical events aren't really taught to schoolchildren in the part of the world I come from, so reading about it later in adulthood is a positive alternative.

I would say that I recommend this book. It's a historical travel narrative, it's less about the traveller and definitely more about the place. It's written in a way that for me, as a reader, it has produced the end effect of me wanting to get there and see first hand what the author has seen. I give it 4 out of 5 stars.