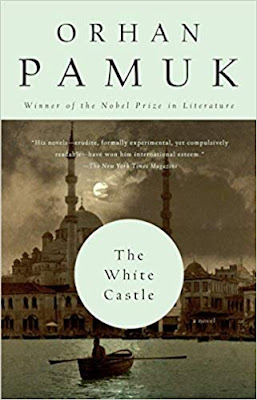 This was an interesting book. But perhaps it's also a little bit too academic and theoretical that it wouldn't grip would-be readers of Orhan Pamuk to his style. Hence if you're trying to read Orhan Pamuk for the first time, I would not recommend to start with this book.

Anyway, this novel is about a travelling sailor in the 17th century, coming from Venice, who has been captured by the Ottomans and taken as a slave in Istanbul. He becomes the property of a man named Hoja, who seems to bear an uncanny resemblance to him. They have a master-slave relationship, but sometimes in the course of the book, this relationship flips back and forth. At some time, the reader is now not sure who is the master and who is the slave, since both look very similar to each other, and both know a lot about the other, so each can inhabit the other's personality and pretend to be the other one. And in fact, at the end of the book, somehow the narrator flips, indicating a very unreliable narrator, since in the beginning, the book was narrated by the slave, and now it seems that the book is ending with a narration by the master. The reader therefore never knows if the two characters indeed have exchanged personalities, or not.

I must say however that this book was rather easy to follow, and I wasn't lost at all in the historical aspects of it. But there was still something that I felt was missing. It lacked a certain oomph perhaps, and in the end, I felt like it didn't have enough negative aspects for me to hate it, but at the same time it didn't have enough positive aspects for me to like it either. I felt very ambivalent about it in the end. And I was only glad to have finished it because at some point I would like to read all of the novels that Orhan Pamuk has published.

I am aware that there are several themes running in the book, and if you read the corresponding Wikipedia article for the book, you will learn what they are. I just felt like it wasn't made prominent enough in the book, or if it didn't it appeared as if it wasn't too noteworthy to focus on. My most charitable takeaway for the book was that it was historical fiction, and that I learned a little about 17th century Ottoman Empire. But beyond that, I am afraid that this isn't the most memorable book for me.