Book Review: The Tibetan Book of the Dead 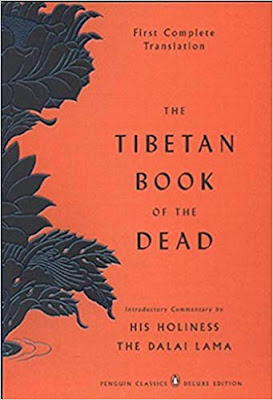 Every now and then, I pick up a religious text, not necessarily because I want to be religious, but at least to acquaint myself with what I am actually against. I am an atheist, and I do not believe in any religion, but just because I am against religion does not mean that I do not educate myself with what I am against. After all, it's better to know one's enemy than to be ignorant about it. Hence, at some point I thought it would be interesting to pick up this book. After reading the Bible and the Qur'an then The Tibetan Book of the Dead felt like an interesting next step.

I entered this book not knowing what to expect, but after finishing it, I must say I had a more positive impression of it compared to my impressions of the Bible or the Qur'an. Things were repetitive, as is the case typically with religious texts. But somehow reading about these repetitive texts more or less approached meditation, and I didn't mind the structures repeating over and over again. I also learned about the Buddhist belief structure. And one thing that is evident is that unlike the Abrahamic religions, there seems to be no emphasis on eradicating the Other. There isn't a command to kill the non-believers. And perhaps that's a good thing.

See, in this book, the emphasis is on how to escape the cyclic process of reincarnation and the suffering that is attached to it. The text consists of plenty of instructions on how to escape from rebirth, how to block wombs so that your soul doesn't enter it, how to make sure that the dying person is liberated so that they can attain Nirvana. There isn't any mention of disciples killing non-disciples, and believers oppressing non-believers. This is actually a relief compared to how things are in Christianity or Islam.

I also gained a basic understanding of Buddhist beliefs. There is the emphasis to do good, because everyone does good and bad things in life, and in the end, these will be weighed, and will affect the likelihood one has of escaping the cyclic process of life, death, and rebirth.

Buddhism is perhaps the major religion in the world that is least associated with violence. That said, this does not mean that there are no Buddhist extremists. One can just look at historical events in Myanmar, Sri Lanka, and Japan to name a few examples.

In any case, I am glad I have picked up this book. Yes, there are still areas where I found it bizarre since of course this is a religious text, and therefore the appeal to logic is not there, but nevertheless I think this is the one religious text which appealed to me the most. Perhaps the fact that emphasis is placed on one's deeds and not on killing others makes a big difference to me. I give this 4 out of 5 stars. I recommend it to anyone who has interest in East Asian philosophies.