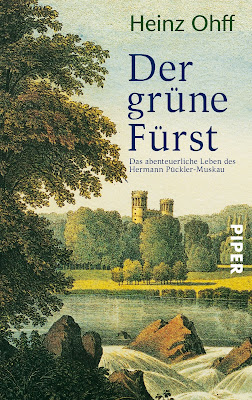 This book was a difficult read. I suppose my reading comprehension in German still has a bit of catching up to do.

See, I wanted to move beyond travel narratives and explore a different genre. So somehow I encountered this book, a biography, and decided to pick it up. I must say it's definitely harder to comprehend prose about the life of a person, than prose about someone's travels in a foreign land.

Anyway, this book is the biography of Prince Hermann Ludwig Heinrich von Pückler-Muskau, a rather eccentric and interesting character who lived from 1785 to 1871. He was born in Saxony. He was known for landscape gardening, as he has overseen the creation of several English-style gardens in the area. He was also well-travelled for a person of his time. He spent a significant amount of time in England, in the Mediterranean, even in North Africa and the Middle East. He even bought a slave girl from Ethiopia and brought her back to Europe.

In any case, I have to say that my level of German isn't there yet to be able to say that I have enjoyed this book. I have learned a lot about this person, and I would have this information in my head in case I find myself in the area (after all, Saxony is very close by, and his gardens are quite accessible from Berlin), but unfortunately for me, reading this book was more a comprehension exercise.