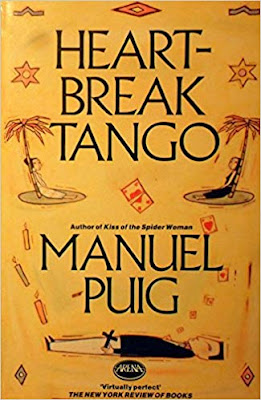 See, this book is about Juan Carlos Etchepare, a handsome man who died of tuberculosis. After he dies, the small town that he was in more or less turned itself upside down, mostly because his death caused the people who were hallucinating about him to panic. You know, when you die, you think that you would take your secrets with you to the grave, but for Juan Carlos, it seems that his death just uncovered a lot of skeletons in the closet than one would expect.

The thing is, the book is written in various styles. There's the letters that are passed from various female characters who were infatuated with Juan Carlos and were devastated that he isn't with us anymore. There's also the newspaper clippings of reports of his death. There's also the police reports (there's a murder case embedded within the narrative). There were plenty of other writing styles, that at some point I felt like this book was written by multiple people, all who were told that they should write something related to Juan Carlos Etchepare.

In the end, I didn't like it, because I was struggling to achieve even the basics: I was having a hard time figuring out what was happening. Perhaps this book is just written for someone that has more bandwidth than me. But after completing 220-something pages of this book and reaching the end, I still don't have an idea what transpired, beyond the hazy snippets that I could catch left and right. For me, it felt like I was reading a novel in a foreign language, where only some words were recognised. And because of that, I am not sure I could recommend this book. I give it 2 out of 5 stars. Unfortunately, I have had a better experience with the other book of Manuel Puig's that I have read.