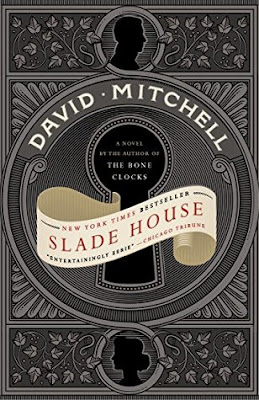 Oh, this is one book that was hard to put down.

Slade House is actually a fantasy book, masquerading as a horror novel. See, it is a collection of narratives, one after another, happening every 9 years. All written in the first person, each narrative tells the story of Slade House's "Open Day", when two immortal beings invite a special mortal into the house, only to prey for their soul. The immortal beings (or Anchorites, as they are called, though this is not revealed in this book, and only revealed in Bone Clocks) have devised a way to trap a mortal being in order to suck out his soul. These immortal beings feed on a soul every 9 years, or else they die. And this book is essentially a narrative of their feeding sessions, one after another, every 9 years.

Until, of course, the chain is broken. Slowly but surely, cracks appear, and yes, in the end, it becomes a battle between Anchorites and the Horologists, the main forces that were doing battle in Bone Clocks.

I loved the suspense of this book. If I didn't have other things to do, I definitely would not have put it down. However, perhaps since I have read all the other books of David Mitchell, I can say that this isn't his most wickedly marvellous offering. If this were the first book someone picked up, then it's probably just an average experience. In his other books which involve multi-person narrators, each section was written in a different writing style, making the book immensely engaging. I could say less with this book. Don't get me wrong, I found this book heavily engaging, but it is less impressive when considered with the other works that Mitchell has offered his readers.

One thing I really liked here however is how it slowly revealed itself to be a fantasy novel. It definitely starts as a horror story. I mean, thirty pages into the book, someone was already dead, and the soul eaten by two bizarre characters. But as the narrative progresses, things are revealed to be connected to bits and pieces of other stories in the David Mitchell universe, again, reminding me of hyperlink cinema. And this is what I like about Mitchell. Seemingly random and unconnected threads somehow are all related to each other, in some way. Again, this goes back to Mitchell's major themes, like reincarnation, which was explored heavily in his other books as well.

Overall, I enjoyed this book. If you're a Mitchell fan, then this book is another addition to his landscape. But if you're thinking of reading Mitchell, I suggest you read Bone Clocks first before you read this one. It will make more sense that way. I give this book 5 out of 5 stars.