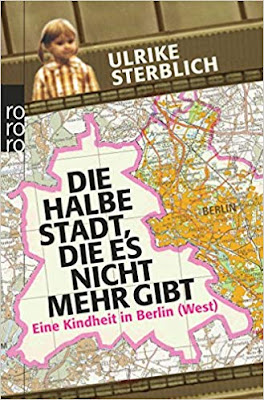 I have to say, I was surprised to realise that I liked this book. It was such a smooth read, and it was perhaps one of the rare instances of me reading a book in German, where I wasn't too focused on the language, allowing me to free up my mental capacity and actually enjoy the contents. And I must say, I definitely enjoyed the contents, given that I am living in the same city that the events in this book has happened.

See, this is a book about the childhood of the author, Ulrike Sterblich. She was born in West Berlin in 1970, and grew up within the wall. In this book, she talked about her experiences growing up in this divided city, talking about herself and her friends in various locations around West Berlin. And the nice thing is that she always anchors things to the present by giving a small detail about what has happened to these locations in the meantime. So even though the events were from a distant past, reading these events provided me a broader background with the places I go to regularly in the present.

So in a way, reading this book felt like I was time travelling. There's plenty of places that she talked about which I know exactly where they are. Some of the cafes, the theatres, the sports stadiums, the prominent buildings, and other landmarks that she has talked about still exists, perhaps in a different management, or a different form altogether. But nevertheless, it has provided me with additional context, and now I think I know a little bit more about the city that is slowly adopting me little by little.

For example, the metro station Schlossstrasse on the U9. For some bizarre reason, the northbound train is on a completely different level than the platform for the southbound train. It never made sense to me since the U9 is the only line that stops in this station, and on each platform, there's this other side where there is a railroad but no train seems to be using it. In fact, there's a metal fence that prevents people from going there. I didn't know why this was the case until I read this book. Apparently, there was a plan to construct a new metro line, the U10, and this line was supposed to stop in Schlossstrasse, together with the U9, allowing passengers to change lines. But obviously the U10 is non-existent, so now there's no use for that extra set of tracks. I also realised there are a few ghost lines underneath the city, built in preparation for this non-existent metro line.

I also learned about the history of some of the buildings that I know are around in the city. For example, the Tränenpalast, which was apparently the building which formerly housed the place where West Berliners could do their bureaucracy whenever they wanted to cross into East Berlin. Or the Amerika-Haus near Zoologischer Garten Station, which was formerly a building that - as the name suggests - occupied by Americans, where exchange students had to go to for an interview before they were sent to various locations in the United States.

The book ends with the fall of the Berlin Wall; perhaps the author was quite lucky to have a coincidental story line. She was basically an eyewitness to the historical events that surrounded the fall of the Wall. Come to think of it, this event was one of the first world events that I remember, for some reason.

Anyway, I definitely liked this book, and would recommend it to anyone who wants to learn a little bit more about Berlin and its history, from the eyes of a local. I give this book 4 out of 5 stars.