Book Review: The Lives of Things by José Saramago 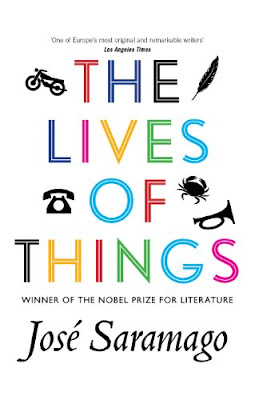 Most of José Saramago's works are novels. I've read the majority of them, so I am slowly working on covering the rest of his output. Hence I came to this book of short stories. And I must say, there's the stamp of Saramago all over this book.

See, Saramago decided to write stories that are political allegories of what has happened in Portugal during the reign of the dictator Salazar. Saramago has a very witty way of showing the despair and disappointment and absurdity of the political restraints that this regime has imposed on Portugal. No wonder he later decided to move to Spain. In any case, his writing is great and delivers the point crystal clear.

This book actually contains 6 short stories. In "Chair" it tells the story of a slow rotting chair that slowly collapses. "Reflux" is the story of a bizarre king who had an immense fear of death, so he reconstructs his entire kingdom so that he would not see evidence of death as much as possible, but this obviously failed. "Things" on the other hand is the story where objects started rebelling against humans by simply disappearing, until almost everything disappeared in the end. "Embargo" is the story of a man who was somehow trapped in his car who had a mind of its own, leading to the man's death in the end. And there's "Centaur" which was the story of a man-horse who abducted a woman.

There's an element of magical realism in these stories, but it's of a flavour different from Gabriel Garcia Marquez, for example. José Saramago's style is more rough and edgy, and it definitely foreshadowed the strong major works that would come years later.

I definitely recommend this to someone who has previously enjoyed José Saramago's writings, and want to know how it all began. This short story collection was published just after his first novel was published, so it's definitely an early work. If you are a Saramago fan, then perhaps this book is of interest to you. I give it 4 out of 5 stars.