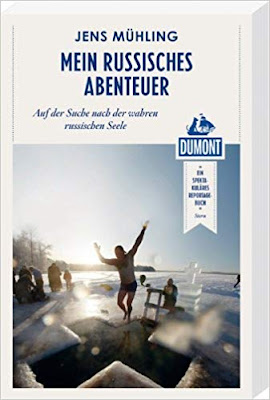 I am slowly beginning to think that I really enjoy travel narratives that are written by journalists, compared to travel narratives of random ordinary people who just decided to go somewhere "exotic" and write about it. This is the second book I have picked up written by Jens Mühling. I first read his travel narrative about Ukraine. And somehow I liked his writing style a lot that I opted to pick up this second book, this time about his travels within Russia. And I must say, I have learned a lot!

See, this is not just a random travel narrative, where the author said that he went to X, then he went to Y, then to Z. Rather, Mühling has a detective-like approach to his writing, almost making it sound like it's an investigative journalism piece. See, he wanted to go to a very remote part of the Russian taiga, where the Russian hermit Agafia Lykova lives. Agafia Lykova happens to be a member of the Old Believer Church in Russia, where modern social and cultural developments are strictly avoided. They have been far removed from modern society to the point that they have eccentric beliefs, like thinking that barcodes are a manifestation of Satan.

This book has plenty of eccentric characters, and what is great about it is that these are all real-life characters. Sometimes, reality is indeed stranger than fiction. Mühling has met several of these eccentric Russian characters along his trip, including Anatoly Fomenko, as well as the preserved 24-cm-long penis of Grigori Rasputin. Perhaps, after spending months in Russia, one definitely scratches way more than the surface.

Anyway, I must say that I have learned a lot about Russia while reading this book. It was definitely captivating, and I enjoyed reading it all the way to the end. This is a well-researched book, and something that transports its reader to the middle of the Russian heartland. Don't read this book if you want to whet your appetite as a preparation for a brief trip to Russia. There aren't any noteworthy sights to read about here. Instead, there's real stories of real Russian culture and society, from the most mundane and urban to the most eccentric and rural. I give this book a solid 4 out of 5 stars.