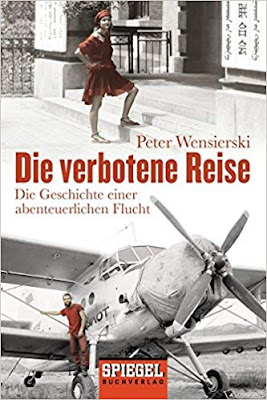 This was an interesting book to read. At first, I had the idea that I didn't like it, since it was supposed to be a travelogue, or at least based on the title I thought it was, yet the trip didn't start until halfway through the book. See, this is a book about the trip of two East German university students, to Russia, to Mongolia, and then to China. And I suppose the first half of the book was providing the background for it.

The main characters are Jens and Marie, both real-life people, originally from East Germany. Jens is from Leipzig and Marie is from Potsdam. They met in East Berlin, as students. Jens is studying to be a biologist, and he is very much interested in the natural life and environment of the world. He loves to travel, so he finds ingenious ways to fund his adventures, deep into the Communist bloc. However, of course, his behaviour would attract the attention of the Stasi.

See, Jens somehow gets his hands on an outdated invitation to Mongolia. He manages to forge it, and for some reason, the forgery was not discovered. Instead, he and Marie gets a passport, which is a privilege back then, together with a Russian transit visa, as well as a visa to Mongolia. They spend weeks in Mongolia, exploring the country, riding planes, hitchhiking, and discovering new places for them. And somehow, when they get back to Ulan Bator, they get the idea to apply for a Chinese visa. This they also get.

Then after some time exploring China, they find themselves in Peking, in front of the embassy of West Germany. This is where the road splits. Jens always wanted to explore the world, and his East German passport hinders him. So he makes the bold step of going to the West German embassy in order to defect. Marie on the other hand wanted to go back home. So she does not join him. Instead, she takes a train back to Mongolia, then back to Russia.

Of course, a few years later, the wall falls, and Germany becomes reunified. But then back at that time they didn't know that. They lose touch, and only reunite later when the journalist, Peter Wensierski, decides to write a book about their trip.

See, what I find interesting and fascinating with this narrative is the willpower and desire of Jens to see the world. Growing up behind the Iron Curtain means that his every move is watched, and constrained, and there is no freedom to simply explore the planet that we find ourselves in. For the East German authorities, every part of one's life is connected, and they can punish you, or your family, if for some reason you find yourself out of line with the government. This is just not the life that Jens wanted to live.

This is a book that at first I thought I would not like. But I was proven wrong. I give this book 5 out of 5 stars.