Earlier this year, I mentioned that I started the process of applying for permanent residence. And I am happy to announce that after some months, after a denial, after a further consultation with an immigration consultant to argue against the denial, after a couple more months of waiting, and after several documents sent over by post and email, I now am a permanent resident.

See, I had to apply by filling out a form and sending the form to the Foreigner's Registration Office in Berlin. Together with the application, I sent the supporting documents that they required. I did this back in February. A few weeks later, I received a letter signifying receipt of my application, and at the same time, they already told me that my application was being denied, since according to them, I would only qualify from 2021.

This is false. The thing is, permanent residence is typically allowed after 5 years, according to German law, as well as according to EU law. When I arrived here in Germany in 2012, I had a work visa, by virtue of being employed in academia. I was granted a work visa by German law, and my clock started ticking from September 2012 onward. However, in May 2016, I changed my status, and received a residence permit by virtue of being a family member of an EU citizen, which is a provision not by German law, but by EU law. So in May 2016, another clock started to tick. And by February 2019, I have been in Germany for more than 6 years, somehow I haven't qualified for permanent residence since I haven't been here for 5 years neither from the perspective of German nor EU laws. Hence the first reaction I received was a denial of my application.

That interview happened last October. And after that interview, I received my permanent residence. It's now a sticker in my passport, saying that I have the permission to remain in Germany for an unlimited period of time.

This is a very good feeling.

I like the fact that no matter what happens, I can call Europe home. And I actually like this home. The other day, I saw this large billboard (see picture below) in a metro station. It's actually a billboard showing a poster from the Federal Ministry of Justice and Consumer Protection, saying that Germany is a constitutional state, and there are equal rights for all, even in love. I must say, I am a big fan of the progressive thinking. So yes, I think I like my new home. We'll see how it goes. 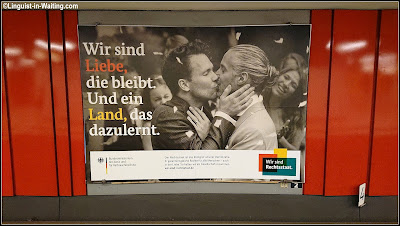