Book Review: The Ground Beneath Her Feet by Salman Rushdie 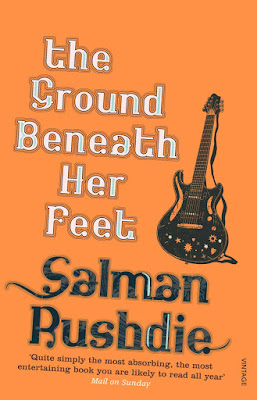 This was a weird book. I must say, if not for the last 50 pages, I would have hated this book. And perhaps at the same time, this is one of those books that is the reason why I read books all the way to the very end, even if I have a feeling that I hate it. Because you never know if you will like it at the end.

First things first: this is not the novel that I would recommend you would begin with, if you want to start reading Salman Rushdie. He has many other novels that are way more accessible than this one. I would say start by reading The Enchantress of Florence first, followed by The Satanic Verses. If you like those two books, then go ahead and read this one.

See, it's basically a love triangle. There's the narrator, Rai, who is a photographer. There's also Ormus Cama, a guitarist with an ear problem forcing him to perform within a glass box during live events. And there's Vina Apsara, the vocalist, who has an insatiable sexual appetite. Everyone pretty much is weird. There's also bizarre relatives and serial killer siblings. At some point, I lost track of who was who, and even now I don't quite know how all characters are related to one another. Vina at some point disappears, which makes Ormus miserable. And then she appears again, but this time, Ormus says that he would wait ten years before having sex with her. And in the meantime, Vina is so horny that she sleeps with multiple different men, including Rai.

That's not all. There's also this parallel world thing going on. It seems that our world as we know it, is a parallel world to the characters in the book. And every now and then, there's a window between these two worlds, and some characters can jump back and forth between these two worlds, the most prominent of them being Maria, who seems to be so obsessed with Ormus, she dry humps him all the time, even though Ormus is so not into her, he doesn't even get an erection.

Want more bizarreness? Well, it seems that Ormus can predict earthquakes. And earthquakes are now treated as political weapons. And Vina at some point was in Mexico, when an earthquake occurred, and the earth opened up, and swallowed her up. Now Ormus becomes so depressed he starts seeing Vina everywhere.

Anyway, the book was very hard to follow, and frankly speaking, at the midpoint I started thinking that I am definitely hating this book. But surprisingly enough, the last fifty pages redeemed the book for me. Somehow everything eventually made sense, and it slowly wrapped up in a way that things added up.

So yes, I would say I give this book 3 out of 5 stars. It's definitely a Rushdie novel. But it is not the most accessible one, and one that would at first tax your patience.