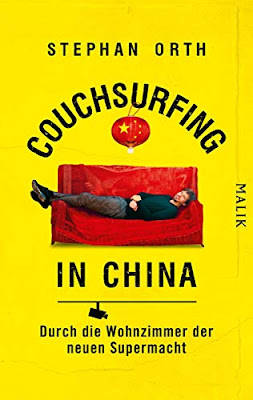 Apparently Stephan Orth wrote a third book, after writing about Couchsurfing in Iran and Russia. Since I liked both of those books, I decided to pick up the third in what seems to be a series, this time, in China. And unlike the two other books, this time, it seems there is a global theme to this book, a thematic thread that binds all of his stories from cover to cover: surveillance.

Yes, plenty of the ideas he has written here touch on China's system of mass surveillance. And perhaps due to my work touching on data protection and data privacy, the idea of mass surveillance touches a nerve. And therefore with great interest, I found myself leafing through this book in no time.

Like the previous two books I have read, I definitely liked Orth's writing style. It is a style that I could easily grasp and relate to, and it portrays the country he visits in a very unbiased light. He also has a very enjoyable way of writing his travel misadventures. And yes, perhaps due to this, even if I don't like the idea of mass surveillance, I find myself figuring out how to put China on my destination list.

As with his previous books, I liked the fact that he talked about multiple points in the political spectrum. He bumped into dissidents, people who were critical of the Chinese government, and people who were also sympathetic, as well as people in the middle. There were people who for their safety he preferred not naming. And there were people he met who were activists who were trying to push their agenda, even though the Chinese government through its soldiers of censors try their best to eradicate it.

The picture he paints of China make me curious, even though it definitely sounds like it is a country I don't want to live in, I definitely think I would want to visit it some time. We'll see.

So yes, as with the previous two books, I liked this one as well. I give this 5 out of 5 stars.