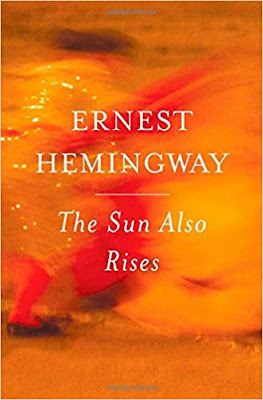 A friend gave me this book to read a few months ago, hence I put this one on my queue. I must say, I haven't read any of Hemingway's works, so this would be a good chance to get acquainted with his writing. 250 pages later, however, I must say, that I am not impressed, and unfortunately, I don't have a favourable opinion of the book that is said to be the quintessential novel of the Lost Generation.

See, this book tells the story of Jake Barnes and Lady Brett Ashley. These are two flamboyant characters, expatriates living in Paris, who seem to have no purpose in life except to go partying. The novel is more or less segmented into three parts: the first part was about their extravagant and ridiculous life in Paris as they jump from cafe to bar to cafe, until they decide to go to Spain; the second part was about their fishing expedition in some river in Spain; and the third part was about the San Fermin festival in Pamplona, where the characters watch bullfighters get gored. All throughout these events, nothing really substantial happens, but their conversations are voluminous, and for the most part, does not make sense.

I ask myself, would I hang out with these people? Most definitely not. Hence perhaps that was the main reason why I have been questioning myself why I am reading a narrative about absurd and stupid people when I want nothing to do with them. As the back cover says, apparently the Lost Generation and its group of Parisian expatriates were living in an age of moral bankruptcy and spiritual dissolution. These are people who were living like there was no tomorrow. And unfortunately for me, there is a tomorrow. I have grandiose plans for my future. And therefore I cannot relate.

I also didn't quite like Hemingway's writing style. The sentences were short and simple, and so the semantics are indeed easy to understand. What this means however is that there's plenty of things happening that were unwritten, and the reader must deduce. That is a neat trick, but if what you're left to read are just line after line of annoying conversations between multiple drunk and ridiculous people, then it quickly becomes tiresome. After 30 pages, it feels like you already can get the point what the entire book is about.

So yes, overall I didn't like this book. I give this book 2 out of 5 stars. The probability of me picking up another Hemingway is at this point, rather low.