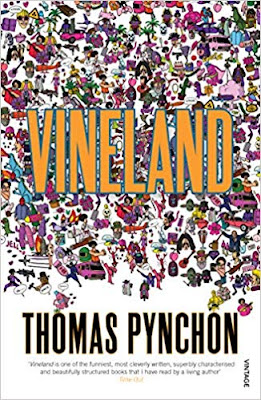 Hmm, I don't know what to think about Pynchon. I've read 5 books of his already before this one. Three of those I really liked, and gave 4 out of 5 stars. On the other hand, the other two I hated, and gave 2 out of 5 stars. I am afraid that this current book belongs to the latter. I just couldn't wrap my head around this one. Honestly, I had to look it up in Wikipedia to figure out what was happening, and even then I couldn't get it.

There's plenty of episodes that definitely shows the mark of Pynchon. There's his zany writing style, and I must admit, I liked the parts about the ninjas. At some point I even caught myself laughing. But that episode came and went, and once it was all gone, I was again lost. As I mentioned in my review for Gravity's Rainbow (another book I didn't like), at some point I ceased to see the point. Vineland is 384 pages long, but I do wonder whether one needed 384 pages for this.

This makes me torn: I seem to have a 50/50 likeability rate when it comes to Pynchon's books. I have loved 3 books of his and hated 3 books of his. This means that the jury is still out on him, whether I like him as an author or not. I guess I have to read another book to find out. In any case, I don't recommend this one to others. I give it 2 out of 5 stars.