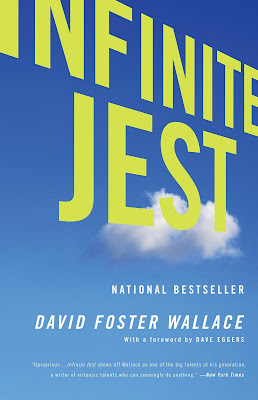 Unfortunately I couldn't get back the two months I have lost in reading this book. I can't believe it took the author more than a thousand pages to say whatever it was he wanted to say. And the bizarre thing is that one thousand pages later, I still don't know what he wanted to say. I don't even have a clear idea what happened in the book. And yes, I do consult the Wikipedia article for the book, and I don't understand how the article authors even figured out enough to be able to write that article.

The one neat thing that I guess I would comment on is this footnote structure. Some of the footnotes made sense, others absolutely didn't. There was a footnote that was basically a bibliography of fake literature, one after another. I didn't exactly get the point. Perhaps it was more a visual thing, something that your eyes just need to look at, and not actually read. In any case, it was amusing, but just for a second.

The thing is, I am less inclined to see this book as a literary genius, but more really just a cure for insomnia. It was too long for what it was trying to achieve, whatever that was. It was very uncontrolled, expansive, and without a point, unless the point was to bore the reader. Because for me, the two months that I took to read this monolith was definitely boring. I rarely do this, but this time, I am giving this book 1 out of 5 stars. Utterly not recommendable.