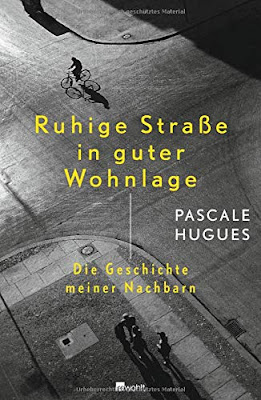 There is a quaint and subtle sense of appreciation when you read a very well-researched book about a very tangible place like a street in your neighbourhood. See, I picked up this book because I make it a point to ensure that a quarter of the books I read are in German, and this book seemed relatively accessible enough for a non-native speaker like me. I was browsing in the section of the bookstore where they have books of local places, and this seemed like a good candidate to pick up.

See, this book is written by French journalist Pascale Hugues, who has been living in Berlin since the late 1980s. She lives in Schöneberg, which isn't my neighbourhood per se, but close enough nevertheless to where I live, and I definitely am familiar to the places that she talks about. Every time I go to the hairdresser I pass by her street. This book is about all the historical episodes that her street has witnessed, from its beginnings in the beginning of the 20th century, when the mansions started popping (her building was built in 1905), all the way to the present day. The interesting thing is that she never mentions the name of her street, yet there's enough clues that allow you to figure out which one it is.

There is a point why she never mentions the name of the street. The name doesn't play a role, really. Rather, the main characters are all the tenants of her street and their histories. There were plenty of Jewish tenants, and she took great pains to research what has happened to them. She has found contacts with these people and their descendants, from all over the world. And yes, as I walk by her street every now and then on my way to the hairdresser, now I wonder what other types of people have inhabited these buildings from the past.

I was talking about this book to a friend the other day, and she made me realise that there's a different sense of appreciation I can get, compared to if she would read this book, mostly because I live in the area and know what the author is talking about. For a reader that isn't familiar with the area, then this would just be another non-fiction book. But for me, and perhaps for other readers who are familiar with this area of Berlin, then things wouldn't be the same, now that I know what historical events have happened in this street in the past.

Overall, I enjoyed this book very much, and would highly recommend it to someone interested in Berlin's history. I give it 5 out of 5 stars.