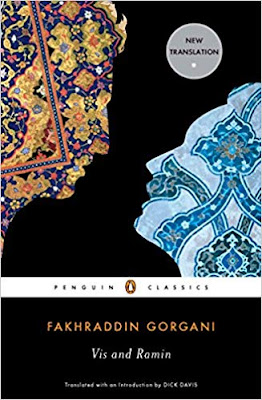 I don't remember anymore why I put this book into my reading list. But every now and then, I would have the urge to read classical literature stemming from outside of the Western World, such as the Mahābhārata, The Tibetan Book of the Dead, and Shahnameh. Vis and Rāmin is just another one of these books. And I must say, this was a very enjoyable read, which was surprisingly unexpected.

The version I read was translated by Dick Davis, who was also the translator of the version of Shahnameh two years ago. This translation is written in pentameter couplets, which provided a very rhythmic feel when one is reading it. I couldn't help but use my fingers every now and then when I bump into a particular line that seemed off (only to realise that the line indeed consists of ten syllables), since I felt like I have been reading every line with a particular melody inside my head. Some epic poems were translated into prose, but this one was translated into poetry, which I must say, is rather impressive.

The story is essentially a love triangle, between Vis, a princess; Rāmin, a prince; and King Mobad. Vis was promised to Mohad before she was even born. King Mobad once saw Vis's mother Shahru, and was immensely attracted by her beauty, and therefore asked her to marry him. However, she was already married, so instead she promised that she would give him a daughter in case she would produce one.

There's many of events, which I wouldn't summarise here, but essentially these characters change their minds often. Vis cannot make up her mind whether she would remain with her husband Mobad, or go with Rāmin. Rāmin is the same, who until the last minutes doesn't know whether he would pursue Vis or be content with his newly-found wife Gol. And Mobad swings back and forth between a lovestruck husband to a sadistic jailer.

In any case, I definitely enjoyed reading this one; I blasted through it surprisingly rather fast. It probably helped that I was also quite broadly familiar with the various geographical locations that were mentioned in the poem, since these were places in Iran that I have passed through a few years ago when I visited. I recommend this book, especially if you're looking for something that is not in the typical Western canon but is rather accessible. I give it 4 out of 5 stars.