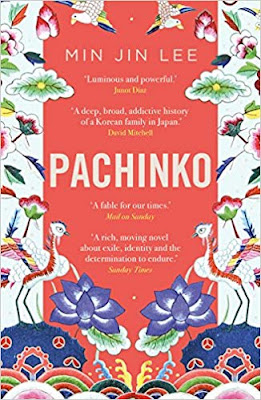 This is a book that I definitely liked. After reading it, it gave me lots of food for thought, so to speak.

This book tells the story of several generations of Koreans in Japan, spanning a time from 1910 to 1989. It is a historical novel, yet it is very character-driven, centring on Sunja, who appears in the very beginning as a little girl, all the way to the end as an old great-grandmother. The book has many topics, though several central themes run throughout, including racism, power, and discrimination.

I also found this book enjoyable to read since I myself have spent some time in Japan, having lived there for almost five years from 1995 to 2000. And the fact that parts of the book are set in Osaka, the city where I was, made me reminisce and recall the old memories of my time there, which is two decades ago by now. I definitely got my interest in the city piqued, resulting in my checking things out virtually, curious to know how things have changed over the years since my departure.

This book also has made me think about Japanese society. I've never experienced Japan to be multicultural. Rather, I have always found this a very insular society, a society that is hard to penetrate. I have spent several years as a student in the local Japanese school system, and have witnessed bullying first hand. As a foreigner, people also tried bullying me, but perhaps the fact that I didn't understand the language much sort of acted as some insulation, since I didn't really understand what was going on in the first place and therefore didn't give the expected reaction, and at some point, they just gave up.

Japan is a place that while I can imagine myself visiting again, I definitely cannot imagine myself settling there for the long-term. I just don't find the acceptance and tolerance that one can easily find in other countries. I don't think I can tolerate societal homogeneity the way it is evident in Japan. I prefer variety, and somehow, no matter how much of a global city Tokyo is, there still is this glass ceiling so to speak, which makes Japanese society somehow very hard to penetrate for outsiders.

This book reminded me of all that, and reading this results in plenty of thought-provoking episodes. I definitely recommend this to anyone interested in social inequalities, as well as in Korea-Japan relations. I give it 4 out of 5 stars.