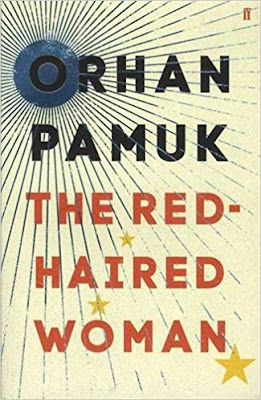 Boy, this was a spectacular slow burn.

It started as "meh", with me scratching my head and wondering whether I'd eventually find this book interesting. But it slowly picked up, and I found myself eventually on the edge of my seat as it steadily became a page-turner. And yes, the ending was theatrical, and gave me the feeling that I should start the book all over again.

Essentially, this novel is a psychological study about father-son relationships, not mind you, not the "normal" type. It is essentially a recasting of the Oedipal myth, parallel with the story of Rostam and Sohrab from the Shahnameh. This book contrasts Sophocles' Western perspective of patricide, with Ferdowsi's Eastern take of filicide. And somehow, for the main characters of this novel, life imitates art. Pamuk has taken essentially one storyline and made it complex, bringing it out of either Thebes or Iran and into modern day Turkey.

Pamuk, who in his other novels, has appeared as a character, does not do so in this one. Rather, his characters are inter-connected by a web of complex relationships. Parallelisms abound: Cem's father was absent throughout his childhood, and so was Cem from the perspective of his son, Enver. Master Mahmut became Cem's surrogate father, and afterwards, he was also Enver's stand-in for a father figure. Aside from that, the book also explores ideological contrasts, such as West vs. East, religion vs. secularism, authoritarianism vs. individuality. And of course, there is the mythical belief of red-haired women as the harbinger of evil.

Overall, I must say I enjoyed this book, much more than I expected. I would give it 5 out of 5 stars. I definitely recommend this as an accessible book if one is interested in Orhan Pamuk's works.