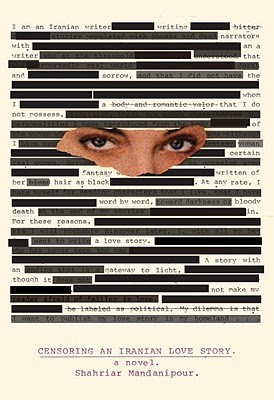 This was an interesting read, though I must say that at times I felt like my interest was waning. In any case, everything considered, this book felt like it had something new to offer, and therefore I would say that I liked it.

See, it's actually a story about writing a novel in the Iranian context. So it isn't necessarily about two lovers, Sara and Dara. But rather, it is about the author, who is trying to write a story about Sara and Dara, knowing that the text has to pass through Iranian censors. And this is what makes things tricky.

There's three different typefaces that are used in the book. There is the normal font, which is used for texts where the author explains what he wants to do next. There's also the boldface font, which is intended to be the text of the novel that the author is writing. And there is the boldface text that is struck through, which is intended to show the parts of the text that the author himself censors, though it is still left for the reader to discern what they are. Altogether, it creates a multi-layered effect, a meta-novel of sorts, and this I must say, is ingenious.

There are magical realist elements in the novel. After all, if you're the author, where you are a character in the book, and you are a character writing a novel, where you have full control of what your characters do, then you can entertain fantastic turns of events. And yes, sometimes, the characters of the novel you're writing becomes more powerful than you. This novel definitely can be amusing at times. I also like the parts where the author (as a character in the book) starts to write certain passages, only to realise that this plot development is a dead end, and so he tells the reader to disregard the last chapter, since that would go nowhere. It definitely has a few tricks to keep the reader engaged.

More importantly, however, I think this is a great piece showing how censorship has hindered the lives of plenty of Iranian writers. There are so many hoops and hurdles that one has to go through in order to have a book published, and this book makes that absolutely clear. Life in Iran can be surreal, though as I have learned by reading this book, as well as my own experiences visiting the country briefly a few years ago, the locals have also perfected a way of surviving pretty much whatever hardship life decides to throw their way.

Overall I enjoyed this book. It's a very cleverly written book, and something that I would recommend to others. I give it 4 out of 5 stars.