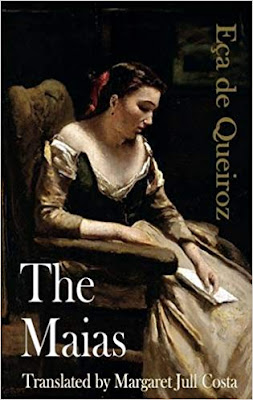 I definitely enjoyed this book. This is the third book I have read from Eça de Queirós, and I seem to enjoy them all.

This book revolves around the Maia family, consisting of Afonso, his son Pedro, and his grandson Carlos. They are a rich family, and in Portugal of the late 19th century, reputation is quite a big thing. So if you're rich, and your son somehow decides to hang out with a pretty woman with a not so desirable family background, then you would worry. This was Afonso's predicament, when Pedro falls in love with Maria Monforte. They get married, without Afonso's blessing. But then Maria goes rogue and falls in love with an Italian man, leaving Pedro in the lurch. But before she does that, two children are born, a daughter, and a son, Carlos.

The majority of the book is actually focused on Carlos, as a young man. He's rich, and he finds a beautiful woman, Maria Eduarda. They become lovers. Alas, this isn't a relationship that is meant to be.

I won't expose much more of the plot. In any case, it is gripping, even though the story is rather dated. Eça de Queirós seems to be fond of plots that revolve around sexual relations. That was the case with The Crime of Father Amaro as well as with Cousin Bazilio. I never realised how the 19th century can be very sensual.

The massive novel is also about the general evolution of society. Times are changing, and I have sensed this running sentiment about traditions and how it is being eclipsed by other ideas. Modernism is manifested as a rebellion against the church, as modern families' children are educated not with Catechism but with science. This is actually a theme I see in the previous novels of Eça de Queiroz. Perhaps the fact that he was a diplomat exposed him to plenty of other schools of thought beyond those that would be familiar to Portuguese society.

Overall, I found this book enjoyable and a great read. I definitely recommend it to others. It is a wonderful historical novel, and has plenty of relevant themes even for the 21st century reader. I give it 4 out of 5 stars.