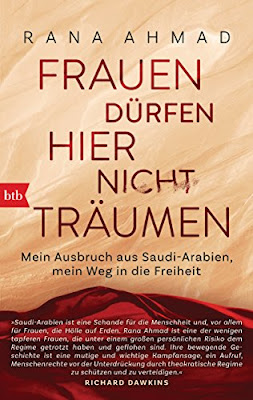 I picked this book up because I was intrigued by Rana Ahmad's story, which for some reason I encountered at some point. She writes under a pseudonym: to protect her life she does not reveal her real name, because if her family finds out where she is, then her life might be in danger. I've read about how difficult it might be to leave Islam, but not from a female perspective, which is definitely much worse.

This book chronicles her life experiences growing up as a Syrian in Saudi Arabia, and while there are happy moments in her life, there are definitely aspects of it that would make one decide to do a drastic move and escape. In her case, this meant escaping from her family and Saudi Arabia, and going to Europe. Reading about her endeavours makes me admire her drive and courage, since if she decided to remain in Saudi Arabia, then it would be a daily struggle with her brother, who believes that he has every right to kill her because she brings dishonour to the family.

I've never understood belief systems where emphasis is placed on belief to the point that it overrides the family. Reading about her experiences makes me appreciate more my own, and how easy it was for me to leave the belief system that I found myself into. Yes, my family eventually disowned me, but at least there were no death threats. My life was never in a position of danger, unlike what the author experienced. As much as I didn't like what happened in my case, to some extent it could have been worse. I am very glad I did not grow up in a Muslim family.

In any case, this is a very captivating book and something that I would recommend to anyone wanting to know what it is like being a woman in Islam. Especially what it is like when as a woman you have hopes and dreams beyond getting married and making children. The author wanted to do more than what society expected and dictated to her, which put her life in trouble. I give this 5 out of 5 stars.