Book Review: The General in His Labyrinth by Gabriel García Márquez 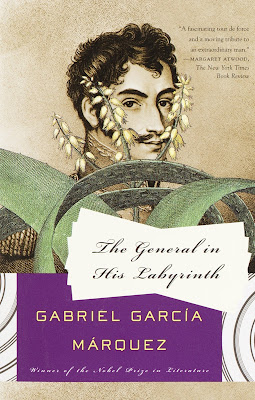 See, this is a dictator novel, chronicling the last few months of Simon Bolivar's life. I don't know much about Simon Bolivar aside from the fact that he was a very crucial historical figure which played a large role in South America. There once was the country of Gran Colombia, which became the origins of the current countries Colombia, Venezuela, Panama, and Ecuador. Simon Bolivar played a major role in creating that country, carving it out of the Spanish empire. Beyond that, I don't know much.

And this novel portrayed Bolivar in his end-of-life. He's aged, his glory is gone, and he is trying to leave for Europe but couldn't do so because he doesn't even have a passport. In the end, he doesn't manage to leave South America and dies.

I suppose I was biased by my previous experiences of reading other García Márquez novels, novels where the scenes were in technicolor, and the dictators were strong manifestations of power, to the point that you would feel yourself trembling as you attempt to stand in front of him, knowing full well that he could order his chefs to cook you so that he could eat you up if you happen to be one of his enemies. The dictator in this book on the other hand felt out of energy, as if a balloon had all of its air pumped out, and it is lying limp on the side of the road. While the narrative was definitely very well researched and rich in historical detail, it felt less of a novel and more of a biography of a historical figure, focusing on this person's final and not so impressive years.

In any case, I should say that you should only pick this novel up if you have already read García Márquez's other more famous and impressive works. Read this for completion's sake, but don't use this as your entry point to reading his work. I give it 3 out of 5 stars.