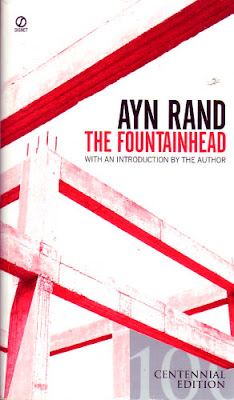 I went home early yesterday, since I knew that there were going to be someone at home to change the lock. And when I got home, there was the maintenance guy, and he was changing the lock.

Going home early also provided me the time to finish the novel I was reading. It was a very whirlwind and engaging novel. It was about the philosophy of sex, seen from a guy whose girlfriend cheated on him. Anyway, it was an existentialist novel.

So, I returned that book to the library, and I started on a rather thick book, entitled The Fountainhead by Ayn Rand. I had picked this book up from a bookstore back in June when I was in Manila. The last time I read a book by Rand was something like 3 or 4 years ago. I read it while I was in undergrad. I read Atlas Shrugged and I loved it. I loved it to the point that I made it a point to visit the Atlas Statue in New York City in the Rockefeller Plaza in front of St. Patrick's Cathedral.

So, I am starting on another Rand novel. Hopefully, this turns out well too.

Some days ago, I wondered about my attitude towards things that are foreign. I seem to have no culture. What I mean by that is that I do not have some sort of deep attachment to anything Filipino. Not that I abhor things that are Filipino, but I don't seem to relate to them. Rather, what I do is I pick up random cultural things that I encounter wherever I may be.

Like yesterday. Yesterday was rather cold, and so I decided to wear my poncho to school. And it was perfect for the temperature. I had a short-sleeved shirt and a pair of slacks, and on top of it I wore my blue llama poncho. It served its purpose well. Yes, some people were looking at me, but who cares? I am not Latino, but so what?

And when my roommate saw it when I got home, he told me that I was very Ecuadorian.

Maybe some of you may recall that I have an international lay-out with regard to my office space. It is utterly bizarre how I am like a sponge, absorbing random things about different cultures. It is the case that I cannot think of anything that would produce culture shock to me. If something strange occurs to me in a foreign land, I just interpret that as that is the way that they do things, so there is nothing wrong with it.

Maybe my brain has been desensitized with the many varieties of culture there are. 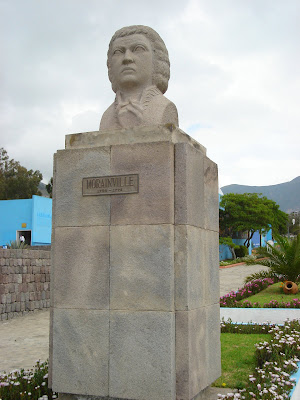 (Morainville, member of the French Academy of Sciences, from my La Mitad del Mundo Series)