Winter Storm at its Finest

Yesterday was a winter storm day. It started at around morning, and ended at around evening. Now here was I, a hardcore nerd, who even made a pact with another friend of mine that I would wake her up in the morning and together we would go to school. When we left for school, it wasn't snowing yet. But as we were working inside our heated offices, we saw that it was really going down.

The high schools closed for the day early in the morning.

Then Lockwood Library decided to close early, due to the weather.

I didn't bring lunch that day, since I wasn't feeling enthusiastic about cooking at night, so I hoped that there was something open on campus. Around lunch time, I went out to the Commons. There was one open, the Indian place.

They said that if they didn't put the sign up that they would be open, they would have closed. Worked out well for me, but I could see that the curry they had was still piping hot and brand new. Not much eating going on I suppose.

Then around 4 PM, we decided that we should leave soon. I checked the radar, and it seems the snow would abate after another hour. And sure enough, it did. The roads were tricky though.

We were crawling, and we saw cars getting stuck left and right. We got stuck ourselves, in the parking lot, since the snow basically locked our car in, and so we shoveled the snow from the tires first, and after a few pushes, we managed to be on the road.

So yeah, that was yesterday. I spent the day today digging, at separate occasions.

Oh, and there will be another one coming up tomorrow. 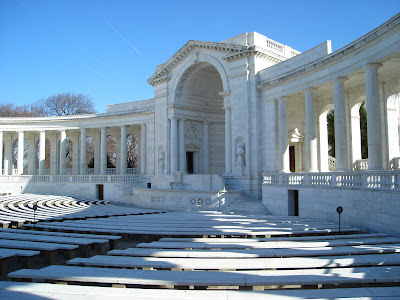 (Towards the Stage, from my Arlington Cemetery Series)