I haven't written any of my linguistic factoid entries recently, the last one being back in February. So I suppose I could write one for today.

And for today, the topic that I have chosen is iconicity.

Now what does this topic have to do with linguistics? The thing is, language is such as marvelous human faculty, and it lets us do many different things. It lets us ask questions, it lets us describe things, and it lets us command other humans. Language is a very interesting tool that us humans have, something that other beings such as animals don't, given the fact that they do not have the ability to do some higher level cognition.

Anyway, what does iconicity have to do with language? Well, iconicity refers to the fact that events are described in the order that they occurred. So, for example, if you ask a schoolgirl what happened in school, she would probably say the following.

I boarded the bus, then I saw my best friend, then we went to class, and the teacher showed us a very pretty book.

The order of the presentation of the events in the narrative roughly corresponds to the actual order of the events. However, that is not the only possible way of stating what happened. Different languages in fact have different ways of encoding events, and sometimes, the language allows us to encode events without following the actual order of occurrence. In English, for example, this language allows us to construct non-iconic discourse by making use of the pluperfect.

John got into an accident. He had been drinking heavily the night before.

In the above case, the drinking event was in fact temporally situated before the accident, but English allows us to construct a discourse where the event order does not match the presentational order of the events.

The curious thing is, not all languages do that. In fact, other scholars argue that there are some languages that only permit an iconic narration of events, one of those languages being Yucatec Mayan. This language happens to be a tenseless one, in the sense that the information as to whether an event occurred in the present or in the past is not encoded grammatically. In this language, narrations always take the order the events happened, and violations of this event order are not permitted.

From a processing point of view, it seems that iconic discourse is easier to understand. Several decades ago, psycholinguists have studied children in how they understand temporal connectives like before or after. It seems that very young children do not comprehend these connectives at all. If I remember correctly, it was Eve Clark who did experiments like these, where she asked very young children to act out certain scenarios, such as the following.

The boy picked up the teddy bear, before/after he patted the rabbit.

If I remember my bibliography right, she found out that very young children use an order-of-mention heuristic when performing the tasks. In other words, whatever action was mentioned first was understood to have happened first, without actually comprehending the meaning of the temporal connective. It is not until ages 4 or 5 that the full import of the temporal connectives are understood. 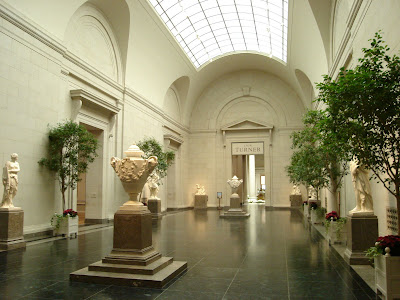 (Marble Garden, from my National Gallery of Art Series)