Ah, ever heard of this term? It sounds a little Zen, isn't it?

Well, vowel harmony is a type of long-distance phonological assimilatory process that can occur most of the time within the word domain, but sometimes in phrases as well. Now let me translate that sentence in English. It simply means that given a certain word, there are times in which the form of a certain vowel changes depending on other vowel forms in a word.

I suppose this is better discussed by discussing affixes first.

You know how in words, one can make a new word by adding an affix to it? Say, in English, in order to make a plural, one adds a -s? Okay, got that? Now, some languages have plenty of suffixes, of the form -VC, where "V" stands for vowel, and "C" stands for whatever consonant it is. Of course, there are other forms of these in varying lengths. However, what is interesting is that the form of the vowel is not fixed. In some words, it may be "a" in others it may be "e" and so on.

I suppose an approximate English example of this is the choice of "a" or "an" as an article. One uses "a" in front of a noun, unless the noun begins in a vowel sound. So it is "an honor" to eat "an apple" and so forth. The form of the article depends on another unit.

Vowel harmony is like that, except that the change isn't the presence or absence of a letter/sound, but on the quality of the vowel. Unfortunately, English does not do this.

So, where can people find languages that do this? Two countries come to mind: Finland and Hungary. That is because Finnish and Hungarian are the two most-spoken languages in the Uralic language family, and this family is known for big-time vowel harmony. Another language family in which vowel harmony is prominent is Turkic, so Turkish and all its linguistic relatives in Central Asia have this trait as well. 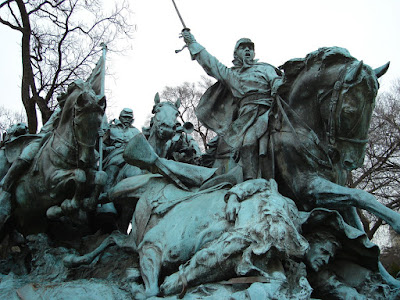 (The Cavalry Up Close, from my DC Memorials Series)