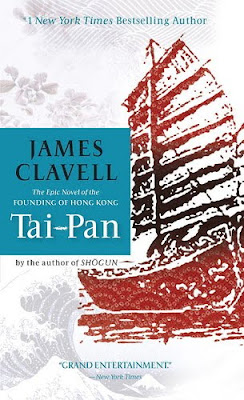 I have an affinity for historical fiction. And one such series of books that I am slowly working my way into is James Clavell's Asian Saga. Last year, I read Shogun. This time, I finished the second book, which was set more than 200 years after the first one, Tai-Pan.

The current book is about the founding of Hong Kong, after the Opium Wars. It centers on the main character Dirk Struan and his family and company, The Noble House. He is a merchant who owns an armada of trading ships, plying the route from Hong Kong to London. His biggest rival is Tyler Brock and his company. There are several back stories involving their respective families, their love affairs, their sexual relationships with European and Asian prostitutes and concubines, and so on. Several other plotlines emerge, including European diplomacy with America and Russia, Chinese gangs, and so forth.

Perhaps one weakness of my review here is that I cannot help but make a comparison to Shogun, since after all, it is part of the same series. Every detail I notice here brings back similar aspects in the previous novel. With that disclaimer, I still think that this is a marvelously written book and worth recommending.

Instead of describing the plot (which, if I did, would take immense space here as the plot is enormous), I would rather focus on the good (and bad) points of the novel. I suppose the main theme of the novel (and perhaps of the whole series) is the culture clash between the East and the West. Several instances of this appears in the novel. The European general dislike for bathing is described, together with the superstition that bathing actually causes diseases and death. The Eastern tradition of concubinage is tackled, and also how this was viewed by the Europeans. It is actually amusing and ironic to contemplate the fact that the Europeans are offended when the Chinese call them barbarians, and yet they also call the Chinese heathens.

I am not a history buff, so I do not know whether the actual events are indeed true, chronologically. However, a quick glance in an online encyclopedia says that there are real-life characters that served as inspirations for several of the characters in the book.

As with Shogun, the ending was rather surprising. In the previous book, I wrote last year that the ending was inconclusive. Here, it was rather abrupt. Several story lines were terminated with the passing of a strong typhoon, and power changed hands. As always, the ending provided for a segue so that the generation of the characters can have another story to follow them. I won't give any details as to how Dirk Struan fared in the end, but I should say that for a book that belongs to a series, it holds its end of the bargain very well.

Compared to Shogun, there's less sex in this book. The only mention of sex here in Tai-Pan has something to do with whorehouses and sexually transmitted diseases. Also, there is one snippet about perhaps the never-ending theme of Asians being so fascinated with respect to the size of the European main character's manhood: the Japanese geisha were gawking at Blackthorne's penis size in Shogun, and the Chinese servants were gawking at Struan's penis size in Tai-Pan. Depending on one's taste, that may be a good or bad thing. At least, Clavell is consistent in this respect.

Overall, as with Shogun, I recommend this book for those people who are big fans of historical fiction. It is a page turner, but it isn't an airport novel. It brings life to boring historical events, at least for some. I give this one 4 out of 5 stars. 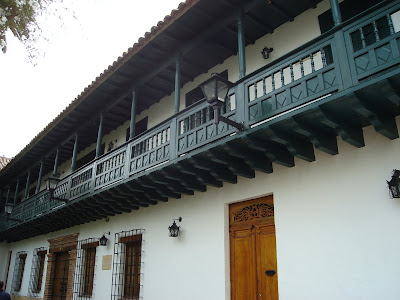 (Balconies, from my Bogotá, Colombia Series)