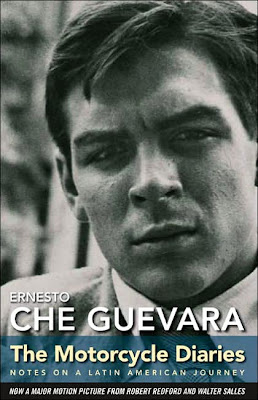 An edited version of this article was first published as Book Review: The Motorcycle Diaries by Ernesto Che Guevara on Blogcritics.org.

I rarely pick up non-fiction. And whenever I do, it's usually a hit-or-miss, I either like it or hate it. I have this idea that most of the non-fiction I have read, especially memoirs, are books that didn't sit well with me. However, I decided to give the genre another chance, and after reading this book, I am glad that I did.

This is the diary of the Argentine doctor and revolutionary, Ernesto Guevara, more known by his nickname of 'Che', as he traveled around South America with his friend Alberto Granado, using a motorcycle. The travel was done in 1951-52, leaving from Argentina, crossing the Andes to the other side in Chile, then heading up to Peru, Colombia and Venezuela. Along the way, Che experiences several facets of life in South America that later on shapes his revolutionary outlook in life.

As I was reading this, I cannot help but make comparisons to another travelogue that I have read recently, and that was Jack Kerouac's On The Road. I have read this travelogue a few months ago, when I was in Mexico. And at that time, I wasn't impressed. This time, I loved what I read. And perhaps the only way I can review this book properly is by comparing it to something else.

First, it helped that I was quite familiar with the places that were mentioned in the book. Reading about Che's impressions of Cuzco made me nostalgic about the place. And judging from what he wrote, it seems that little has changed in that corner of Peru. The fact that I have been to Saqsayhuaman, Tambomachay, and other places that he has mentioned while traveling in the Sacred Valley definitely helped in appreciating this work. Perhaps that is one factor why I liked this travelogue better than On The Road, in that this one focused a lot more on the scenery and the local culture.

Second, I appreciated the gradual mental change that was reflected in Che's writing. He has a middle-class rather affluent background, and here he was, faced with the grim realities of South America. He encounters indigenous peoples such as the Aymara, the Quechua, and the Yagua who live in the interior, and witnesses the poor realities that these people face. He also encounters a leper colony and sees the unlucky situation that they are in. This gradually molds his thinking into Marxism, as evident in his prose. The final sentence especially illustrates this, when he proclaims that he is sacrificing himself to the authentic revolution, bracing his body, ready for combat, as the bestial howl of the victorious proletariat resounds with new vigor and hope. It was quite an idealistic ending.

Personally, I am not sold to the idea of Marxism and Communism, as I feel that humans are inherently selfish. This I think is the one general flaw which makes the idea of Communism a failure. Looking back at history, we see how several Communist states became corrupt; it was never a utopian state where everything is equal. However, I can also see Che's point of view. If you're on the bottom end of the social spectrum, you would wish that life were a little bit easier, hoping that the the riches those bourgeoisie enjoy would trickle down to your own plate. That's the hope. Alas, it is easier said than done.

Perhaps, it is because this is more than just a travelogue, that I personally liked it more than On The Road. As much as I love travel, this book gave me more; it gave me access to the mind of one significant character in history. It may have been a short book (it is just around 150 pages long), but it packs a very mean and voluminous punch. 5 out of 5 stars. 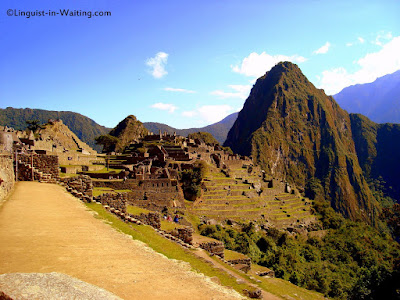 (Approach to the Central Plaza, from my Machu Picchu Series)