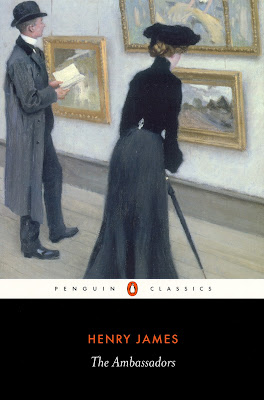 Perhaps it was a bad idea to pick this book up. I had this grandiose plan of revisiting the classical literature, and as a start, I decided to read another Henry James novel. This was my third novel I read from him, having previously read Portrait of a Lady as well as Wings of the Dove back when I was in my teens. I don't remember particularly enjoying those two books, and I thought it was because I was too young to appreciate them, so I decided that at 31, I would be old enough to like a Henry James novel. But it turns out that I am either still too young, or I really don't like Henry James.

Anyway, what is this novel about?

This novel is about Lewis Lambert Strether, an American widower, who lives in Boston. He goes to Paris to convince the adult son of his fiancee to relinquish the delightful lifestyle in Paris and come back to America. The idea is that he wants Chad, the adult son, to go back to America and take over the family business, but as he spends time in Europe, he encounters various complications. Emotional and social complications, to be exact.

Anyway, I don't think I can say much more about the synopsis. Otherwise, I'd just be parroting what I have read in online encyclopedias about the plot summary of this book. Because seriously, I spent a full month reading this book, and yet it feels like I never understood a word. I can definitely understand the individual sentences, after all, they are written in English. However, it seems that the prose is too dense, it is too hard to penetrate, and so someone reading this book during one's 30-minute commute on his way to work would have a hard time being transported to the world that is being painted by the narrative.

Sure, Henry James does not make it easy for the reader to enter the story. The novel begins in medias res, so to speak. No preambles, no scene-settings, whatsoever. It immediately begins when Strether arrives in Europe and we are all transported into his hotel and his thoughts. His writing is so opaque and so it feels like I am inside the minds of these characters, without knowing where my actual surroundings are.

I read before that his style in his later works have been compared to Impressionist painting. That somehow makes sense. It's like one is intoxicated, one is not in full control of one's consciousness, and one is just zooming through the text, as the reader is trying to make out what the actual story is about. Henry James dispenses the use of narrative devices that are traditionally used to make the text coherent. No, rather, the text consists mostly of dialogue between the characters, and the reader is left to fend for himself to see what the social dynamics are that are in place in between these characters.

Oh, another thing I hate about this novel, is the fact that it is not timeless. One has to read this novel in context, and that is the Victorian Period. I am so glad I am not living in that period. People have been so restrictive and masochistic I wonder whether they were ever happy during that time.

Overall, I hated this book. Plenty of critics might consider this Henry James' finest book, but this book pretty much seals the coffin for Henry James in my opinion. I don't think I will pick up another book of his. Not that I dislike classical literature; I actually used to read only classical literature before I turned 18. But this one is really just some impenetrable piece of text, and I have no time nor patience to read it, when my primary purpose of reading fiction is to be transported to the narrative world it is portraying. This book just portrays a scenario, protected by bulletproof glass, and the reader cannot do anything but just scratch the surface and gaze at it from afar. 2 out of 5 stars.