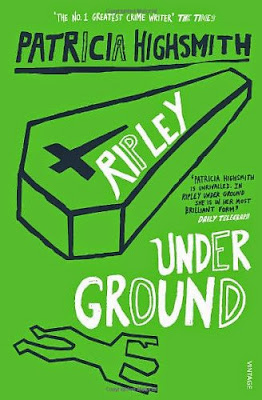 Last year, I have decided to read Patricia Highsmith's The Talented Mr. Ripley. I loved it, as it featured an anti-hero, Tom Ripley, and it was very atypical in my opinion to have a novel focus on a character that one typically doesn't sympathize with, in this case, a killer.

So I wondered how Highsmith would pull it off again with this sequel. This book narrates the actions of Tom Ripley several years after the incident with Dickie Greenleaf. He now has a wife, and instead of Italy, the narrative locates him in France, in a village outside of Paris, with a steady income, and a lavish lifestyle. And sure enough, there is some incident where he has to be involved.

This time, it is about the painter Derwatt. Derwatt was a painter who died several years ago, but his friends decided that he should live further, and that his paintings should be forged by some other artist. Hence, the Derwatt Ltd is a company that profits from the sale of these forged paintings, and Tom receives a cut. Only when a rich American comes to Europe claiming that he thinks his Derwatt painting is a forgery is the whole setup compromised, and Tom Ripley needs to do something.

I wouldn't reveal too much of the plot anymore, but let me say that it is still a page turner like the previous book. There are plenty of references to the first book, so if you are thinking of picking up this book, read the first one before reading this one. As much as several of Highsmith's narrative techniques have been reused from the previous book to this one, I never felt like it was old material. I still had an easy time reading it, and I finished it in no time.

Perhaps the aspect I liked the most is this internal psychological treatment of Highsmith's characters. This is psychological thriller at its best, in addition to the physical actions that happen. The psychological states of several characters are described, but mostly this is true for Tom Ripley. Ripley has a difference between truth and falsity, and I love the parts when Ripley is straightening the stories in his head, figuring out what to say to the police when they come interrogate him. And so far, after two books, he still hasn't been caught.

This isn't the most profound novel, but if you have read several profound books and want a change, I recommend this one. I give this 5 out of 5 stars.