Book Review: Kiss of the Spider Woman by Manuel Puig 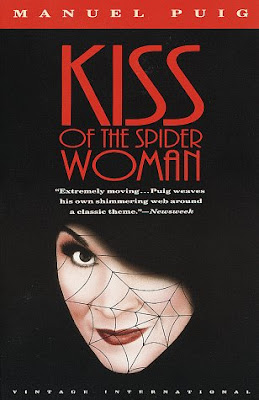 It seems that I have been reading novels about incarcerated people lately. This is the third book I am reading with this theme, but unlike the previous two novels I have read, this book is less about the experiences of the people that are incarcerated, but more about the social dynamics of two people who happen to be incarcerated. In this case, we find ourselves in the cell of Valentin and Molina, two men imprisoned in Argentina. Valentin is imprisoned because he is a member of an anti-government movement who wants to destabilize the ruling body, while Molina is imprisoned because of some indecent thing he did with a minor.

The novel is not written in the traditional manner. Most of the narrative is composed of the dialogue between Valentin and Molina, and so there is no omniscient narrator that provides background information about these two people. Instead, it slowly gets revealed to the reader.

I think this book is brilliant in that it shows the complexity of human nature in different levels. It ends tragically, but I won't tell how. At times it was comedic, at times it was sad. Definitely one of the best prison novels I have read in a while.