Book Review: Our Lady of Alice Bhatti by Mohammed Hanif 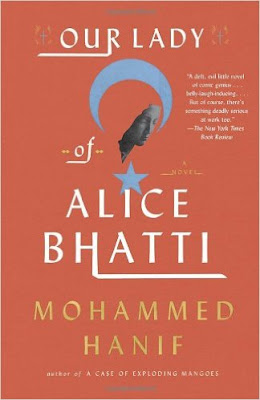 What can I say? Most of the time, whenever there are books that I end up not liking, it's because they start bad, and only later do they turn up good. That's the main reason why I tell people that I don't stop reading books until the very end, even though I don't like it in the beginning, mostly because I have the hope that somehow they would turn out good eventually.

Well, this one is the opposite. It started good. I loved it, until the last 20 pages, when suddenly, everything just dropped flat. It's like all of that build-up created by the earlier pages of the novel suddenly lost steam, and I found myself falling rapidly. By the time I finished the book, with its final page, I was thinking what was the purpose of the earlier sequences, when it's all going to end like that?

See, this novel is about the life of Alice Bhatti, a Christian junior nurse in Karachi. She is a religious minority, as everyone else around her are Muslim. She has a colored past, and she is one of those people who have a strong personality, and for the most part, can be a little bit more discreet. However, she isn't, so she gets into trouble, here and there, sometimes big, sometimes small.

Alice falls in love with Teddy Butt, a Muslim hitman that is occasionally hired by the police. Or does she really fall in love? Maybe it was just infatuation. In any case, they get married immediately, and surprise surprise, they have marital problems. And their problems come to a climax that one day, Teddy Butt pours acid on her face, and her burns kill her.

So did I end up not liking this book? See, I liked Alice. Alice was quite pragmatic, but also headstrong. Given that she was a member of a religious minority, she could have used some more discretion, but at the same time, the activist or idealist in me was championing her headstrong behavior, as she tried to go against the tide. She was also very funny, having for example an attitude like "love is not only blind, it is deaf and dumb and has Alzheimers". Later on she thought that belief in the afterlife is just fear of death wearing a party dress. I liked that attitude. If you're disadvantaged in the society you live in, then you might as well have a great sense of humor to be able to cope.

And then she gets killed in the end.

Maybe the reason I don't like this book is because I was totally unprepared for the tragic twist. Or maybe I was just fooling myself that this book was going to end in a positive note, but come to think of it, no, it just goes further and further down into a vicious negative spiral, as the comic blunders just pile one after another, and it is just comically presented that the reader doesn't notice the threat coming in the end.

So what do I get out of this book? What does this book want to tell me? Is this book telling me something about the plight of the religious minorities of Pakistan? If so, then I conclude that the religious minority are quite disadvantaged, and Pakistan can improve more on this aspect. That's putting it very politely. Is this book telling me about how corrupt Pakistani society is? How the Pakistani police force just manufacture their evidence whenever there is a crime they need to solve? How there are thieves and criminals standing at every traffic signal, pointing a gun at you when the traffic light turns red? How the state of Pakistani medical care is so deplorable it is better to be evacuated to a different country if you need to be hospitalized for some reason? How the Pakistani men are so chauvinist and could learn a thing or two on how to treat women better?

If these are what the book is telling me, then why even sugarcoat it with comedy? These are important social issues? Or maybe the issues are so bad and deeply entrenched, and cannot be fixed at all, in Pakistani society, and therefore the only thing one can do is be comic about it?

If that is the case, then Pakistan, as this book portrays it, is a very pathetic place. I haven't been there, but this book doesn't entice me at all to pay it a visit.

As I read what I have written so far, maybe the reason I hate the book is not because of the book per se, but because of the society that the book portrays. And maybe I still have that little idealist in my head hoping that somewhere in the following pages, there would be poetic justice for Alice Bhatti. Except there wasn't.

Seven years ago, I read Mohammed Hanif's first novel. I remember liking it. I am afraid I cannot say the same thing with his second novel. I give this 2 out of 5 stars.