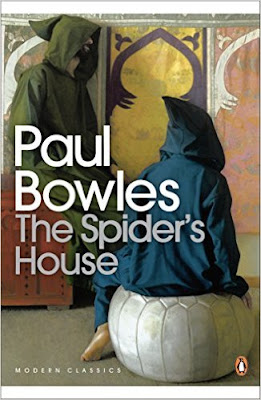 Paul Bowles never fails to amaze me. His novels are simply seductive and alluring, that whenever I find myself reading his prose, I simply devour him. The Spider's House is the third novel of his that I have read, and I must say this is again a very good read.

See, Bowles again presents the reader with characters that are not easy to like. In this book, I can even go as far as saying that there isn't a real hero or main character. Everyone are just supporting characters, and the main character is actually the location these characters find themselves in, that is Fez.

So there is John Stenham. He's an American, and surprisingly enough, he is perhaps the first Bowles character that is not traditionally arrogant and presumptuous. Bowles' previous Western characters were all stupid and dumb Westerners who find themselves in a foreign country, and act haughtily; these are the types who think that the locals are way below them, to the point that the reader wonders why they even waste their time traveling to these exotic locales. That was the case with Porter and Katherine Moresby in The Sheltering Sky as well as with Nelson Dyar in Let It Come Down. John Stenham is slightly different, in that he seems to know the local sentiment, and therefore can distance himself to other tourists, who are more or less stereotypically dumb and stupid. Heck, Stenham even knows how to speak Arabic, while the other travelers cannot even be bothered with it.

Of course, there are other characters like Madame Veyron (aka Polly Borroughs), as well as Moss and Kenzie, who are the typical travelers I have described above.

Additionally, there are the locals, primarily Amar, who is an illiterate adolescent, who is somehow different than the rest of the youths in Fez, and who spends a significant amount of time with Stenham, due to random coincidences.

In my opinion, Bowles has successfully crafted a world in this novel that perfectly reflects our society today. There's the regressive left, who is represented by Stenham. He thinks that he understands the locals well, and considers himself an expert in local affairs, and accepts them for who they are, but at the same time doing so without thinking. Then there's also the populist right, who are represented by the other travelers, who thinks that all non-Western people are beneath them, and that there is something fundamentally deficient in these cultures. And then there is the local population, who simply struggles to stand and have an equal share of the pie.

What I like most about Bowles' novels is that he brilliantly portrays a society where nobody understands each other, simply because no one took the time to figure out what the other side actually wants. Whether it's the Westerners trying to understand the locals or vice versa, or even Westerners against each other, everyone simply assumes something about the other, without even trying to verify it. Hence, everyone comes out as arrogant, which eventually leads to their own destruction.

I also like the confidence that Bowles had, who went as far as writing a novel partly in the perspective of the local. Only a long-term expat like him can successfully pull that feat.

So yes, again I am giving 5 out of 5 stars to Paul Bowles. This one is definitely a novel I recommend.