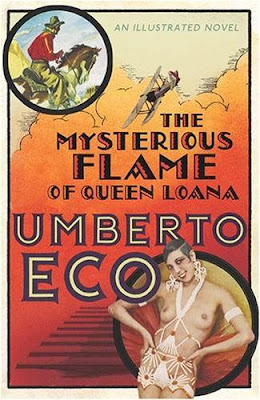 Hmm, I cannot say I was amazed by this book. I have read several novels by Umberto Eco before, and perhaps I just had high expectations for his work. This one I must say, does not measure up with the rest of his novels. While his other novels were very well-researched and opened my eyes to new topics, this one was rather banal. Let me expand on that, but first, let me provide a short synopsis.

This novel is about Giambattista Bodoni, or rather, an Italian rare-book dealer, who happens to have the same name as the typographer. Nicknamed Yambo, the protagonist suffers a stroke, and because of that, he loses all of his episodic memory. He fails to remember everything that has happened to him, but nevertheless he remembers things he has read, and so forth. He fails to remember his family, which creates some interesting lack of memory sequences. He decides to go to his childhood home, in order to see if he can regain some of his memory back. He reads old newspapers, old comic books, and other memorabilia, therefore reminding himself of the history of his generation. However, he still fails to remember certain crucial things, like the face of the girl he had a crush on when he was young.

And then he suffers another incident and falls into a coma. Suddenly everything comes back to him, his whole life flashing in front of him, thus allowing him to remember certain tragedies in the family, and finally, after a long sequence that somehow resembles the final Biblical book of the Apocalypse, he gets closer and closer to seeing the face of the girl he once loved.

I was disappointed. Here I was thinking I would be subjected to some very historical and profound story, but somehow this one just rubbed me the wrong way. Maybe I would have appreciated it more if I were Italian, or if I were the same age as Eco (or at least the character in the book), and therefore had the same pop culture experience. But no, I didn't really grow on Flash Gordon comics, and while the novel might feel very personal and well-researched, there's a part of me that just cannot compare it to how well-researched his other novels were, like The Island of the Day Before, with its background in the historical aspect of how to calculate the longitude; or The Prague Cemetery, where Eco weaves a single fictional character among numerous real historical figures. In The Mysterious Flame of Queen Loana, however, it felt like in order to do research, Eco just dug up the boxes in his attic.

There is a lot of speculation in the book, especially in the final part, when the main character falls into a coma and we're reading a narrative of his thoughts while inside his head. I find it hard to suspend disbelief. First of all, the book begins by being very accurate with neurology and psychology: his descriptions of amnesia were well-researched, and so one would expect things to be realistic. But in the end, one cannot be realistic, because who among us have been inside the brain of a comatose patient, and came back out? What do we know what happens to us when we die? Do our whole life just flash in front of us? I know that Eco was speculating here, but it is a little bit hard to read a novel that begins rather realistic and ends romantic.

In any case, I wasn't impressed. Eco is a good writer, but I don't think this is his best book. If you're thinking of reading Eco, do not begin with this novel. Pick Foucault's Pendulum or The Name of the Rose instead. I give this book 2 out of 5 stars.