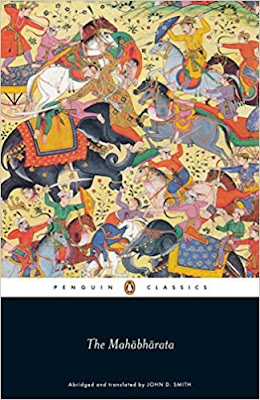 It's been a while since I have read an epic. When I was younger, I picked up Homer's Iliad and Odyssey, two massive books that acquainted me with Greek mythology. While I have read other thick books since then, I haven't read another epic after that. So I decided to venture east, picking up the Mahābhārata. After all, I don't know much about Hinduism, and this book seemed a good place to start.

The Mahābhārata is they say, the longest piece of literature out there. The edition I picked up was abridged, but nevertheless, it had more than 800 pages. The editor and translator mentioned that if the summarized parts were kept intact, then one would need five volumes of the same thickness more or less. That was daunting. Anyway, this epic is about the Kurukshetra Wars, which happened centuries ago, or at least that's what the legend says, between the Pandavas and the Kauravas. The war was 18 days long, and by the end of it, almost everyone dies. It is a very bloody book. But there's actually a bigger picture than that.

See, the Mahābhārata is about dharma. According to Hinduism, there is a set of rules that keep the world going, and one must simply obey it, or follow dharma. The Kurukshetra War started because of a game of dice, where one party cheated, resulting in the other party losing all of its properties. Fate and destiny is taken in high regard here, and nothing happens without a reason. So if dharma says that billions should die in the Kurukshetra War, then so be it.

I must say that the concept of dharma is something I find hard to grasp. The fatalistic approach to life does not sit with me well. I suppose I value free will, and I also value the assumption that I have power over my future. Because if all I would do is rely on fate, then I might as well just sit down and wait for my rocket to come, whatever rocket that is. But I think I would rather live my life more actively.

The other assumption I don't like is this assumption of birth and rebirth, where everyone seems to have the goal of attaining heaven by doing pious deeds in every life cycle one finds oneself in. The idea is that if one does bad deeds, then one is reborn as a lower being, even as an animal. If one does good deeds, then one is reborn as a higher being, either as a higher caste, or by exiting human life and attaining heaven. I wonder, is human life really that bad?

This strengthens my hypothesis that religion is just social morphine. Was it Marx who said that religion is the opium of the masses? Well, if human life sucks, then might as well hope that there is an afterlife, where things are better. If you are suffering right now, then perhaps this suffering is easier to bear when you have the illusion that suffering will be rewarded in the next life. The Abrahamic religions teach this, and so does Hinduism.

One thing that I appreciate, is that Hinduism is more an individual's relation to the gods. Unlike the Abrahamic religions, there is none of this "Believe in my God or else I'll kill you" bullshit. Everything is about dharma: mind your own dharma so to speak.

Anyway, about 18 parvas (chapters), I finished reading this mammoth. The Kurukshetra War was massive, and plenty of people have died. Plenty of weapons have been deployed, and plenty of gods have appeared. I must say it is a very vivid read. But in my opinion, the war is just a small part of the epic. The war only provides a context, and the epic's main point is the exposition of Hindu philosophy.

Overall, I think I enjoyed this one. As much as I have points where I disagree with the philosophy, as a piece of literature this is a mouthful. I would even go so far as to say that I enjoyed this more than the Homeric epics. And yes, after reading this, now some of the Hindu beliefs and customs I have encountered before now make sense. At least it provides context to the customs I see my Indian friends practice.

The Mahābhārata is a very thick book. But I nevertheless recommend reading it. I give it 4 out of 5 stars.