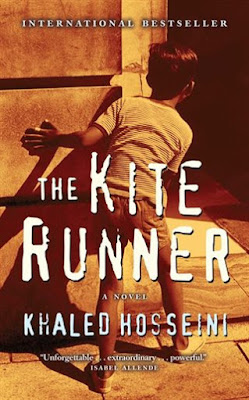 Hmm, I suppose I have an unpopular opinion about this book, given that plenty of people seemed to have liked it.

See, this book reads like it was meant to be a tear-jerker. There were so many coincidences, and the main character had a lot of self-pity. Urgh. Anyway, this book is about Amir, who was the son of a prominent Afghan man, and who grew up with Hassan, a servant. Amir and Hassan were of different ethnicities: Amir is Pashtun, while Hassan is Hazara. This ethnic difference is crucial: Hazaras are Shia, while Pashtuns are Sunni. Later on, when the Taliban takes over Afghanistan, the Hazaras are eradicated.

Anyway, the narrative is centred on Amir, who grows up relatively well-off, until the war comes, and his family immigrates to the USA. Later on, his childhood demons come back and haunt him, when he is faced with the opportunity to correct a previous wrong which he did.

I won't write more about the plot: it is after all complex, and too many coincidences and plot holes were there to make it believable. For example, the main character seems to be able to go in and out of Pakistan and Afghanistan quite easily. Whatever happened to visas? Also, he takes an Afghan child with him on return, without papers! I am pretty sure that Afghan child, a member of a persecuted ethnic minority by the Taliban, don't even have a passport. The way the narrative goes makes it sound like crossing the Khyber Pass is just like crossing over to another European country within the Schengen Area.

Oh, the main character Amir makes me want to tell him to cry me a river. This guy is so much wallowing in self-pity. Perhaps I just don't get this whole attitude of living in tradition. I mean, this guy immigrates to the USA, escaping from the Russians in Afghanistan, yet it seems that he never left the country. All of the people he mingled with in the USA were Afghans. I am an immigrant as well, but I don't cocoon myself in the Filipino community. I have friends from various nationalities. So I don't get this whole way of living where you value honour and tradition in San Francisco because all of the people who you talk to are also people who left the country like you. Stop acting like you're fresh off the boat.

There's also so many coincidences in this book, that it feels like it's all deus ex machina. For example, Amir keeps on bumping to people from the past. His old school bullies later turn up as Taliban officials. Old neighbours show up later on, old faculty members who were supposed to know his long dead mother later suddenly show up as a beggar on the street. As I was reading this book, I cannot help but think of my own past, and I must say, I don't have any contact with people from the past. It makes me think that it is such an ironic life for Amir, who escaped the past by going to the USA, yet continually lives in its ghost.

Overall, I must say I didn't like this book. It definitely reads like it was something written in order to make easily-moved individuals cry. From the beginning, it felt like the main character wanted you to sob at his plight. Sorry, but I couldn't care less about your redemption. I give this book 2 out of 5 stars.