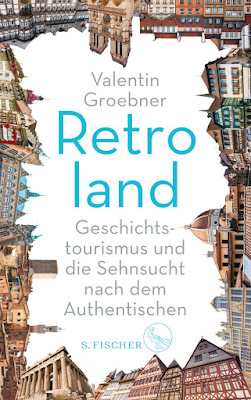 This was an interesting read, more for the experience than for the content. See, I've been trying to venture out of the travelogue genre, so I have been looking for books to read in German, mostly as a way to maintain my German reading proficiency. So one day as I was browsing things in the bookstore, I saw this, and decided to put it on my reading list. It's actually a thought-provoking book, written by an Austrian historian. It makes you think what you are after when you're on vacation, as you visit old historical sites, looking for authenticity.

There's a lot of thought-provoking questions that this book addresses. Questions like "What exactly does it mean to be authentic?" Or "Why do we visit historical sights like crazy?" As an avid traveller, I also sometimes wonder why there is the urge to go to ancient places like Machu Picchu, or the Parthenon, or to small European towns with beautifully-restored Old Towns. Why do we restore these Old Towns with modern 21st-century material, but made to look like they're several centuries older?

To be honest, for the first half of the book, I thought this was over my head. My German proficiency isn't good enough, and a major part of my processing resources were used and taken just to understand the semantics of the book. So there wasn't anything left to react to the book. But for some reason for the second half it started becoming better. It started making me think, and rethink, my attitudes about travelling.

There was a time I was in Iran, and I joined a day tour just because it was the most convenient way of seeing some remote sites. I was visiting an abandoned village somewhere in the desert, together with 19 other tourists, who happen to be all from China. They were armed with their selfie-sticks and they actually weren't paying attention to the narrative of the tour guide. They were completely ignoring him, and all they cared about was to take that priceless photo of the abandoned village from a prominent vista. I wonder if they even knew what they were photographing. And yes, this book asks questions like these, wondering why we have such behaviours whenever we are travelling.

Overall, I think this is an interesting book, but I think I didn't appreciate it as much as a native speaker would. In any case, I give it 3 out of 5 stars.